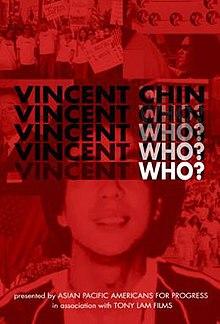 Vincent Who? recounts the 1982 murder of Vincent Chin, which spurred the Asian American civil rights movement.Discussion will follow with the film maker, Curtis Chin.

About the Film
In 1982, at the height of anti-Japanese sentiments, Vincent Chin was murdered in Detroit by two white autoworkers who said, "it's because of you mother** that we're out of work." When the judged fined the killers a mere $3,000 and three years probation, Asian Americans around the country galvanized for the first time to form a real community and movement. This documentary features interviews with the key players at the time, as well as a whole new generation of activists. Vincent Who? asks how far Asian Americans have come since then and how far we have yet to go. This film has been screened at over 500 universities and non-government organizations in the US and internationally.

About the Film Maker
Curtis Chin is a Detroit- born, New York-bred, Los Angeles-based documentary filmmaker. His films include "Vincent Who?" and "Tested." He has personally screened his films/spoken at nearly 600 venues around in 14 countries on social justice, racial equality and civic engagement. Sponsors have included the White House, Lincoln Center, Amnesty International, the government of Norway and many more. He has won awards from the National Endowment for the Arts, the New York Foundation for the Arts, and the San Diego Asian American Film Foundation, among others. He is currently working on his memoir about growing up in his family's Chinese restaurant in Detroit.

Each year, we celebrate diversity by celebrating Asian American Asian Pacific Islander (AAPI) Heritage Month with programs that celebrate the rich AAPI culture, traditions and history.  The Office of Latinx, Asian and Native American Affairs (LANA) is celebrating this month virtualy due to COVID-19 safety precautions. Join us on Webex https://wright.webex.com/meet/mia.honaker or participate by phone by dialing 1-415-655-0003 then enter access code: 478 945 093.

All event are free and open to the public.  For more information about these events or LANA, please call 937-775-2798 or email at lana@wright.edu.

AAPI Heritage Month Calendar 2021.pdf
Share to:
Log in to submit a correction for this event (subject to moderation).