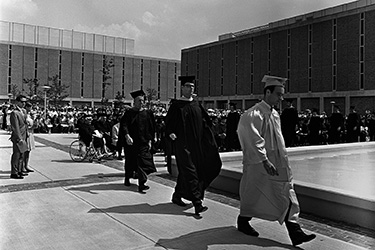 Ohio Gov. James Rhodes’s efforts in the early 1960s to place public higher education facilities within 30 miles of every Ohioan led to the birth of Wright State University.

At the time, Dayton was a high-technology center with a special need for a highly developed labor force. Community leaders mounted a private capital-fund campaign to secure a joint branch campus for The Ohio State University and Miami University that could be converted into a unified state university.

A 428-acre parcel of land near Wright-Patterson Air Force Base was acquired, and in 1963, founders Robert S. Oelman and Stanley Allyn broke ground on the campus’s first building, Allyn Hall.

In 1967, with 5,704 students, Wright State was granted its independent status. At the time, it had three buildings and included divisions of liberal arts, business administration, education, science and engineering, and graduate studies. To commemorate the new university, students held a mock funeral service and delivered eulogies for the departed branch campus.

What is now the Student Union was built in 1969 followed by Hamilton Hall, the first dormitory, in 1970.

What would become the Lake Campus was originally affiliated with Ohio Northern University and offered courses in downtown Celina. It became a branch campus of Wright State in 1969 and over the years has experienced surging enrollments, a nearly doubling of bachelor degree programs, construction of residence halls, and the purchase of nearly 40 acres for expansion.

By the end of the 1970s, the university had 13 major buildings, including ones for the creative arts, medical and biological sciences, physical education and student activities, as well as a dormitory, school of medicine, and the Dunbar Library. The school’s unique tunnel system, one of the largest in the nation, attracted students with disabilities. 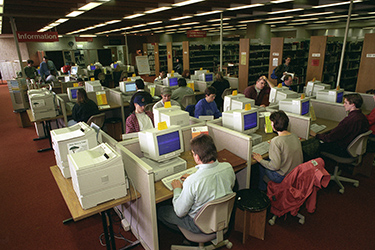 Wright State became firmly established on the higher education landscape in the 1980s. Its medical school graduated its first class in 1980, elevating the stature of the university. Rike Hall, home of the College of Business, was completed in 1981. The Nutter Center was built in 1990, a sports and entertainment arena that would draw millions of people to the campus over the years.

As the 21st century began, Wright State began to focus on research and helping build the regional economy. It would infuse it with millions of dollars and create hundreds of jobs. The Wright State Research Institute was created to be a front door to the university and work with local businesses, industries, academic institutions statewide, nearby Wright-Patterson Air Force Base, and the NASA Glenn Research Center. The institute has since grown into a $33 million operation.

Wright State would also become more deeply engaged with the communities it serves.

The Carnegie Foundation for the Advancement of Teaching selected Wright State to receive its 2015 Community Engagement Classification, putting the university among just 83 U.S. colleges and universities to receive the classification for the first time. And for several consecutive years, Wright State has been named with distinction to the President’s Higher Education Community Service Honor Roll, a national measuring stick of volunteering, community service, service-learning, and civic engagement.

Wright State has been regularly recognized as a welcoming campus for veterans and military personnel. In 2014, Wright State opened the Veteran and Military Center, a 4,500-square-foot area designed to provide a welcoming space and support services on campus for veteran and military students. And the university created a special $100,000 scholarship fund designed to help members of the Ohio National Guard attend graduate school in what is believed to be the first program of its kind in the state. 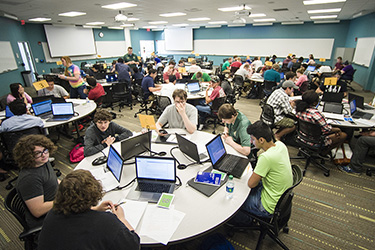 By 2015, enrollment had reached a record 18,000 students, who were watching a building boom reshape the face of the campus.

Additions included a spectacular Neuroscience Engineering Collaboration Building. The building was the first of its kind to be intentionally designed to drive research interaction across disciplines, bringing 30 researchers from seven disciplines under one roof to understand brain, spinal cord, and nerve disorders and develop treatments and devices.

The Student Success Center featured a 220-seat lecture hall and large active-learning classrooms loaded with screens, laptops, and other cutting-edge technology. The Creative Arts Building was expanded and modernized, and the ribbon cut by the actor himself on the Tom Hanks Center for Motion Pictures.

"What you have at Wright State is a “life-altering force for good,” said Hanks.