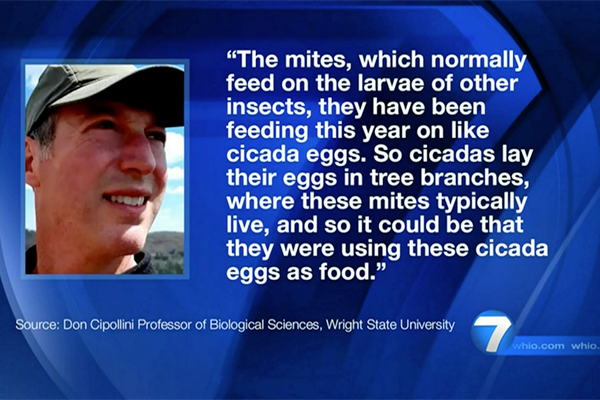 “These things are very itchy, they can be painful,” said Don Cipollini, a professor of biological sciences at Wright State University.

Cipollini explained there is currently an outbreak of the microscopic mites in the Miami Valley, possibly as a result of the big cicada season the area experienced earlier this summer. The mites, which usually fed on the larvae of other insects, have been feeding on cicada eggs.

“Cicadas lay their eggs in tree branches, where these mites typically live, and so it could be that they were using these cicada eggs as food,” Cipollini said.

He explained, they usually hang out in oak trees and other trees. The mites drop from trees, which is why people will end up with bites on their upper bodies, something Robert Jones of Dayton understands first hand.

“It had gotten on to the point where it was itching. It was keeping me awake sometimes at night," Jones said.

He believes the mites bit him when he was on vacation in Virginia in late July. Days after he returned home, he called his dermatologist, Dr. Samia Borchers, who practices in Washington Township.

Borchers said Jones was her first patient to show up with the bites from the mites, but he was not the last. Since then, she has seen two to four patients a day with the bites.