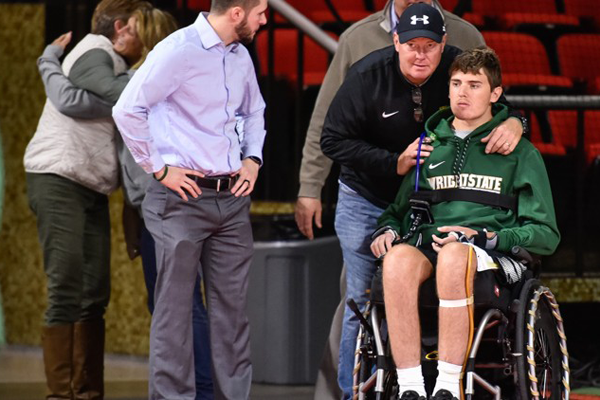 He surprised them before their game with Miami.

The Wright State basketball players were going through warm-ups when Ryan Custer appeared on the edge of the Millett Hall court wearing a green warm-up, WSU shorts, black sneakers and a grin.

He would have joined their drills were it not for the wheelchair in which he was being pushed.

The Raiders immediately ran over and welcomed him back.

Now the team was complete.

There was a lot of significance in Tuesday night’s reunion. It was the first time Custer — a 6-foot-7 freshman forward out of Elder High School last season — had rejoined his teammates at a game since he suffered a traumatic spinal injury April 8.

And it was the first time he had returned to Oxford since he’d suffered that freak injury here while jumping into the shallow water of a makeshift pool set up at a big party just off the Miami campus on North Main Street.

“I really didn’t want to come tonight,” George Custer, Ryan’s dad admitted quietly. “I told him the other day, ‘I don’t know if I can come back to Miami.’

Ryan knew he’d be returning to the place that left him partially paralyzed, but he figured while he’d lost so much here, he’d be getting something back on this night:

“I don’t hang my hat on this being the place I was hurt. I’ve tried to get past that and look forward.”

And when he takes that view, he often focuses on Wright State.

“I miss hanging out with the guys, miss seeing them,” he said. “Even though I’m not playing, I miss it like crazy.”

Kim Custer, Ryan’s mom, knows that: “He’s planning everything around these games. He’s looking at the whole season.”

George agreed: “He wants to come to as many games as he can.

“He asked me the other day, ‘Dad, is it gonna be hard for you to go to these games?’ I said, ‘I’m going to be honest with you. It’s gonna be real hard. But this is all about you. We want to get you out of the house and back with your team as much as you can.’”

George knows the Raiders are good medicine for his son.

Since the accident, they have often visited him and regularly send him messages.

The team keeps his No. 33 jersey hanging in the dressing room and a couple of weeks ago Ryan returned to the Nutter Center and hung out at practice.

Raiders coach Scott Nagy said he hopes Ryan is able to return to classes next semester.

Kim said she and her son watched the ESPN3 broadcast of the Raiders’ season opener at Loyola last Friday night:

“I was hesitant and watched him more than the game, but he did well.”

Nagy said he didn’t know Ryan would be at the Miami game, but was glad he came: “I hope he comes to every game.”

Ryan was brought into the dressing room as Nagy gave his final pregame instructions and then his wheelchair was moved to the end of the bench before the opening tip.

As players would come out of the game, they’d make their way along the bench, bumping fists or slapping palms with teammates, including Ryan.

“I can’t tell you how much he means to this team,” said 6-foot-11 junior forward Parker Ernsthausen. “The fight he shows us, the man is unbelievable. It’s awesome having him here with us.”

Alan Vest, a 6-foot-3 junior guard, echoed that: “He’s literally the exact same person he always was except now he’s sitting down all the time.”

And as he sat with his teammates Tuesday, Ryan admitted there were times he flashed back to last season when he came off the bench for the Raiders in 32 games.

“Every time Coach Nagy looks back,” he said with a faint smile, “I kinda think. ‘Aaah, he’s gonna call my name!’ ”

Ironically, it was against Miami last year at the Nutter Center that Custer scored his first college points — a 3-pointer in what ended up a two-point WSU victory.

Although he averaged 9.8 minutes and 2.2 points, he came on late in the season, averaging 13.4 minutes in the last five contests and hitting three 3-pointers in a victory over UIC in the regular-season finale.

Forty-one days after that he was hurt when he hit someone’s knee as he jumped in the jerry-rigged pool made from straw bales and a blue tarp. He fractured his C-5 vertebrae.

From Delhi Township on Cincinnati’s West Side, he was airlifted to the University of Cincinnati Medical Center where he had vertebrae fragments removed from his neck and four vertebrae shaved.

Soon after he was flown to Chicago’s Rush Hospital, where he took part in stem cell research and had some 10 million stem cells injected into his neck

After 6 1/2 months, Ryan and his family are still waiting for a real upturn from that treatment.

“Unfortunately he’s not where we thought he’d be at this point,” Kim said. “That’s not to say he won’t get anything, but right now we’re very disappointed how it’s turned out.”

As George explained: “Everyone’s different. We’ve seen other people get 10 million cells and they’ve gotten a lot back. But Ryan’s still in a window and the science is so new.

“He went back for his stem cell check-up last Tuesday and I talked to his doctor. There are things they’re working on so we feel hopeful that at some point down the line, there’ll be some sort of cure.”

In the meantime Ryan — who has use of biceps and shoulder muscles but can’t operate his manual wheelchair yet because of a muscle problem in his back — goes to therapy three times a week at Good Samaritan Hospital in Clifton.

When his parents go to work each day he has help from an aide to get ready in the mornings. Friends and family members stop by with lunch and his dad returns home to take him to therapy. At night both his parents do additional therapy with him.

His hard work and positive attitude fuel those around him and that prompted a therapist to ask him how he buoys himself each day. He didn’t know because he once reacted quite differently.

“The only injury he had in 19 years was a broken nose his junior year in high school,” Kim said.

“He was playing baseball, went to steal third, slid and the ball hit him in the nose,” George said.

Kim laughed: “He told the therapist he hid in the basement for a week after that.

“But actually it helped him get a scholarship. Coach (Billy) Donlon recruited him to Wright State. He said he had been impressed by the aggressiveness he saw Ryan show when he played AAU ball wearing a mask and didn’t miss a beat.

“He made him an offer after that.”