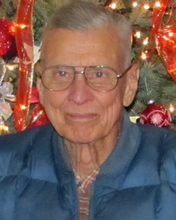 Born March 9, 1921 in Queens New York, Warren Kreye passed away on Oct. 19, 2020, at the age of 99. Warren and his wife Audrea “Audrey” lived in the Dayton area for many years and in recent years resided in Waverly Ohio. They traveled the world together and especially loved to hike the mountains of Germany.

Warren worked at WPAFB and at Wright State as a researcher for many years. Son of the late Charles T. Kreye and Emily (Ahleim) Kreye. Warren was preceded in death by his wife Audrea (Coddington) Kreye and a brother Robert H. Kreye.

Warren served in the Army Infantry during WWII. He was an eagle scout in Troop 96 in Long Island NY. In 1937 he was named Boy Scout of the year and traveled to the White House where he met President Franklin D. Roosevelt.

Dr. Kreye received his Ph.D. from Polytechnic Institute of New York in 1947 with a degree in Chemistry and a minor in Physics and Mathematics. He went on to a distinguished career at Bell Labs in New Jersey, WPAFB Avionics Laboratory, the University of Louisville, the University of Wisconsin and Wright State University, where he was a researcher in the Department of Chemistry and Computing & Telecommunication Services (CaTS).

Warren was a dedicated researcher and a prolific publisher. He was still doing research and publishing well into his 90s. Warren was a member of Sigma XI fraternity, the American Chemistry Society and the Optical Society of America.

Special mention to his long-time friends Brenda and Mark Ramey of Wheelersburg, Ohio, and Jeff and Lynda Jones of Beavercreek, Ohio. Thank you to the great people at River Bend House Retirement Community in Wheelersburg Ohio. A graveside service will be held in Woodland Cemetery at 2pm on Monday, Oct. 26, 2020.