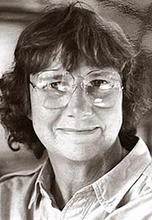 Ruth was brought up in Queens, N.Y., the eldest of German working-class immigrant parents. Her father was a builder, founding his own successful company, and her mother was a cook and housekeeper. Ruth and her younger sister, Margaret, were children of their times, being enthusiastic supporters of FDR’s democratic policies and the First Lady’s progressive social agenda.

As a young woman, Ruth was a participant in Eleanor Roosevelt’s Encampment for Citizenship and was active in The Ethical Culture Society, which she’d attended since she was a young child. Both of these involvements instilled in her a strong dedication to an inclusive and just world.

She chose to attend Antioch College for her undergraduate studies, planning on a teaching career. There she met her husband-to-be, Louis King – fully four times before he remembered they’d been introduced previously. After a 1953 Bucks County, Pa., wedding, officiated by Antioch’s Morris Keeton, they moved to the Detroit area, where her new husband had a teaching position in the Ferndale schools.

There, her first child, Douglas, was born. While in Michigan, she completed her Bachelor of Arts degree in education at Wayne University, now Wayne State. Then, after leaving Antioch just two years earlier as a student, she returned to Yellow Springs as a faculty wife when Louis was hired to be principal of the Antioch School.

In 1967, Louie took a sabbatical at NYU to earn his doctorate while Ruth earned her master’s degree there in educational psychology and completed her doctoral coursework and exams in anthropology of education. The family lived on the eighth floor of a newly built faculty-housing high-rise in Greenwich Village. With five young children in tow, it was a crowded and stimulating two years, rich with memories — a chance for Ruth to expose her rural Ohio children to the city life of subways and museums, arts and culture, and the Ethical Society of her childhood.

Civil rights demonstrations, political assassinations and Vietnam protests all took center stage during these turbulent years. The eldest two children accompanied Ruth to the October 1967 March on the Pentagon, the first national protest against the war.

When they returned from NYC, Ruth was hired as an assistant professor of education at the newly opened Wright State University, and Louis resumed teaching at Antioch – there was a lot of shop talk in the house. Ruth’s involvements were more varied as her family grew: Gourmet Club, Better Health Co-op, gardening, mystery novels, professional conferences and, eventually, European travel, as she was the first Wright State professor to take students abroad for workshops.

Always an innovator with a keen eye for ways to better the lives of her students, and their students in turn, Ruth instigated popular programs and experiences within the division. She allowed no shortcuts, nor did she take any, carefully reading each one of the many student papers she assigned, providing rich, reflective feedback, and asking her students to think for themselves and to form their own opinions, rather than parroting back what they had heard or read.

She launched a very successful accelerated program for older students who had degrees in other fields and who wished to become K-12 teachers. She was part of a team working out of Stanford University that developed guidelines for portfolio evaluation as a component of the National Teacher Exam.

She led workshops in problem solving at Wright-Patterson Air Force Base, in dramatic re-enactment thematic-immersion learning in conjunction with Antioch, and other techniques and subjects as inspiration and funding permitted. Her creativity flourished in classrooms as she understood the value and necessity of gently moving people out of their comfort zones to expand their thinking.

Respected for her progressive ideas, motivated work ethic and dedication to students, Ruth was elected division director in 1982 by her colleagues, despite not having completed her Ph.D., and still being an assistant professor. She very much enjoyed the extended responsibilities, and her rank was raised to associate professor.

Near the end of her 22-year professional career, Ruth and Louie took students to Brazil for a semester. They then traveled by themselves through South America, exploring the Andes, Lake Titicaca, Falls de Iguazu, and took a scientific cruise in a very small six-cabin boat down the Amazon and Rio Negro.

Ruth retired from Wright State in 1990 and, after a final holiday gathering of the whole family there, the Yellow Springs house was sold. She and Louie moved to Hilton Head Island in South Carolina where they had friends and where they remained politically active in numerous ways throughout their retirement years: marching against the Confederate flag over the capitol, organizing workers on Daufuskie Island, working with the MLK Day Committee and service projects, organizing an ACLU chapter on the island and serving on the State Board, co-founding Hilton Head for Peace, initiating a Women-in-Black anti-war vigil group that assembled every Saturday for over a year, organizing a thriving Democratic Club with over 300 members, etc.