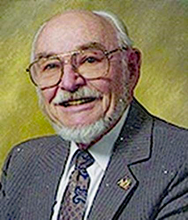 Robert Fredrick Rolsten, 97, passed away on May 14, 2022, in Monument, Colo., with his church family at his side. He was born Feb. 6, 1925, to Chalice and Nell Rolsten of Fort Wayne, Ind., where he was taught the value of demanding work and education.

He graduated from West High School in Columbus, Ohio, in 1944. He subsequently enlisted in the Army Air Corp in 1944 rising to become a bomber flight officer. Upon discharge from the Army Air Corp, he enrolled in Capital University in Columbus and then went on to Ohio State University, where in 1955, he graduated with his Ph.D. in chemistry. From there he went on to work with the Department of Energy in Materials Research, as the Cold War warmed up, and eventually became a registered professional engineer in Ohio and Texas.

Fred went on to have a distinguished career in academia where he rose through the ranks to become a tenured professor of engineering at Wright State University and later dean of engineering. He established mentoring and professional development programs to help his students as mentor and friend, not only succeed at the university but excel in industry and government. Most of all, Dr. Fred Rolsten loved and cared for by his students and peers. Many of whom knew him simply as "Doc".

Fred also owned a consulting firm called the Wright Company where he serviced government, industry, and legal community clients with engineering expertise. This gave him valuable real-world experiences to use in his shaping of young engineering minds and help establish co-op opportunities for students. It also allowed him to do research in helmet design for criteria sports, automotive, and military applications. Many of his findings are still used in today's helmet design.

Notably, he held one of the patents in personal body armor and designed body armor for President Ronald Reagan, which also protected the staff and flight crew during our initial foray into detente with the People's Republic of China. In fact, he was the professor who "stood behind his work" taking a 357 bullet to his chest while wearing one of his ballistic vests.

Serving his country during the Vietnam conflict, he was part of an elite team who operated behind enemy lines gathering intelligence and conducting covert operations as the infamous final survivor of the "five fingers of death." Doc's dedication and loyalty to country was a testament to his love of country and dedication to duty, honor and country.

Fred freely gave of himself to the academic, industry and military community in his many professional publications and books. The subject of these publications ranged from materials properties to helmet design criteria and hypervelocity studies, all of which contributed to making the world a better place for everyone.