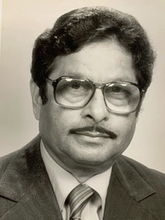 Rishi was preceded in death by his parents, Tikamsingh and Champavati Sharma. He is survived by his wife Urmila; his sons, Dr. Sanjay Kumar and Dr. Anuj Kumar, his daughters-in-law Dr. Marianne Kuzujanakis and Bagyashree Sundaram, and his grandson Caiden Kumar. Rishi is also survived by his brothers Omprakash and Gappu Sharma and sisters Vimla, Shakuntla, and Kamlesh Sharma.

Rishi enjoyed a long and noted academic career. As a young student at the Delhi School of Economics in 1965, Rishi was awarded a Fulbright Scholarship to study at Vanderbilt University, where he received his master's. Rishi earned his doctorate in economics from Wayne State University before joining the faculty at Wright State University in 1973.

Rishi rose from assistant professor to full professor in the WSU Department of Economics, earning numerous teaching awards and letters of appreciation from his students along the way. Rishi served as the associate dean for the WSU College of Business and subsequently as the dean (1992-2001).

As COBA Dean, Rishi steered the college to national accreditation with notations of accomplishment and worked diligently to realize the school's naming as the Raj Soin College of Business. Rishi was awarded the Trustees of the University Award, the highest recognition bestowed upon WSU faculty, and established a scholarship in his name, the Rishi Kumar endowed Student Scholarship Fund.

Rishi served on the Board of the National Conference for Community and Justice, an organization promoting inclusion and acceptance through education and community advocacy. Rishi was also an active member of the India Club of Greater Dayton and a strong voice in the local Indian community. Rishi's talent for discussing international economics and John Maynard Keynes was balanced by his equally deep enjoyment of Bram Stoker-based Dracula stories, James Bond movies, Indian cricket, and spicy food. Rishi's intelligence, remarkable fortitude, humor, and extreme good nature imprinted those who knew him. He will be deeply missed.

Rishi will be cremated privately. In lieu of flowers, please feel free to make a donation in Rishi's honor to the Rishi Kumar Endowed Student Scholarship Fund in the WSU College of Business, the Hindu Temple of Dayton, or to your favorite charity. Morris Sons Funeral Home serving the family.  Online condolences may be left at Morris-Sons.com.