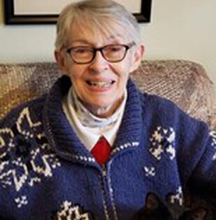 She received her Doctorate in Nursing Education from Miami University, Oxford, and taught at the School of Nursing at both Miami and Wright State University.

Phyllis was a longtime member of Christ Episcopal Church in Dayton. In addition to her parents, she was preceded in death by her first husband Thomas Andrews. She is survived by her loving husband of 38 years, Timothy L. Risner; her children, Thomas B. Andrews and Ann Elizabeth (Robert) Morris; her grandson, Bryan Thomas Andrews; two sisters, Sharon (Charles) Smith and Judith Rice; her brother, John P. (Susan) Baker; and several nieces and nephews.

A visitation will be held 6–8 p.m., Tuesday, July 20, 2021, at the Dalton Funeral Home, 6900 Weaver Rd., Germantown, Ohio. A Graveside Committal Service will be held 10:30 a.m., Wednesday, July 21, at Trissel Cemetery, New Lebanon, Ohio. A Memorial Service to be held at Christ Episcopal Church in Dayton will be announced at a later date. If desired, memorial contributions may be made to Christ Episcopal Church or Hospice of Dayton.