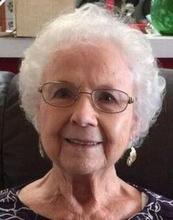 Patricia Irene Gilbert, 96, died peacefully in her sleep on July 13, 2021. She is survived by her son, Phil (Pat O'Neill) of Vail, Arizona; her daughter, Elaine Lagge (Mr. Lynn Lagge) of San Jose, California and nieces and nephews on the Flora side as well as the Gilbert side of the family, including a brother-in-law.

On March 24, 1925, the world was blessed with the arrival of Patricia Irene Flora in the farmland of Kokomo, Indiana. Throughout her life she was always smiling. She was married to the late Lt. Col. (Retired) Harold W. Gilbert. Throughout his Air Force career, she experienced living in different places, learning other cultures, and making a home at each location.

She was successful teaching English at Baker High School in Fairborn, Ohio, 1968-1972. She was a Secondary School Supervisor for Clark County Schools 1973-1976. She taught part time for Wright State University 1976-1980. There she was hired as an assistant professor in the Educational Leadership Department of the College of Education, where she taught until retiring in 1990. She earned Excellence in Teaching Awards at Wright State University. She was an active member in the American Association of University Women at the university and well into retirement.

During retirement she and her husband traveled to many places around the world. She and Hal moved to Tucson in 1993, and she became a docent at the Tucson Museum of Art, where she gave talks on Japanese wood block prints and classical artists for the museum at schools, retirement homes, and organizations around the area.

She will rest next to her husband following a Celebration of Life at Rincon UCC on Saturday, August. 28, 2021, at 1 p.m.