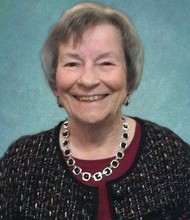 Mary Lou Graham, 84, of Beavercreek, passed away on Feb. 25, 2022, after a brief illness. She was born to parents Lyle Paul and Doris Irene Ankin Bement on Dec. 12, 1937, in East Aurora, NY. She graduated from East Aurora High School, class of 1955. During her high school years, Mary Lou participated in many activities including cheer, chorus, and Student Council. She was a member of the National Honor Society, the Iota Delta Mu sorority, and the Mason’s Rebekah club.

While living in historic Saint Anne’s Hill in Dayton, Ohio, Mary Lou restored a home, participated in the local Garden Tours, and opened her home for the Dickens of a Christmas Holiday Home Tour.

Mary Lou was an active member of the Rona Village Homeowners Association, Fairborn, Ohio, where she served as association treasurer, published the association newsletter, and worked in the management office.

Mary Lou loved spending time with her family and attending her grandchildren’s dance recitals, sporting events, plays and musicals. She enjoyed sharing stories of her life and passing along her love of sewing, quilting, home renovating and gardening. She had a passion for travel, visiting various places in the United States and abroad, and especially enjoyed her visits to England and Egypt.