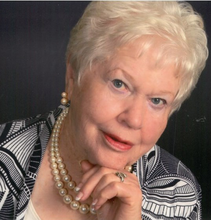 Mary L. Rutkowski, 83, of Centerville, passed away on July 30, 2021. She was born in St. Marys, Ohio, to the late Wilbur and A. Ruth Steva Huckeriede. She is also preceded in death by her brothers Robert and James Huckeriede and a son, Brent Rutkowski.

Mary is survived by her husband, the love of her life, Robert “Bob” Rutkowski, whom she met at WPAFB in 1957. They were married for 63 years. Mary is also survived by a daughter, Cathleen (Steve) Davis and granddaughters, Christina Davis and Hannah Davis; a son, Craig (Penni) Rutkowski and grandson, Landen Rutkowski; a daughter-in-law Janine Turgeon Rutkowski and granddaughter, Sara Rutkowski; sisters-in-law, Shirley Huckeriede and Cindy Huckeriede; and numerous nieces and nephews. Mary also leaves behind many special friends, including bridge partners and neighbors, and her labradoodle puppy, Willow, who brought her much joy, liveliness, and laughter during the pandemic.

Mary retired from Wright State University. She was a devout Catholic and member of the Church of the Incarnation for the past 23 years and former member of Mary Help of Christians Church. She and Bob loved to travel together and spent many winters at the Florida coast, a fun gathering spot for their family where they shared many fond memories. Family and friends enjoyed many good meals and happy times with Mary and Bob as Mary loved to entertain and make people feel welcome in their home. Mary was an eternal optimist who always had a kind word and an open heart.

A Gathering of Family and Friends took place  on August 15, 2021, at Tobias Funeral Home, Far Hills Chapel. A Funeral Mass wias held August 16 at the Church of the Incarnation, 7415 Far Hills Ave. In lieu of flowers, donations may be made to Ohio’s Hospice of Dayton, 324 Wilmington Pike, Dayton, OH 45420.