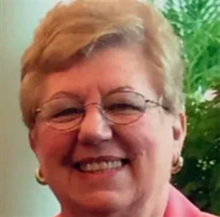 Joanne M. Ballman, 88, of Springboro, Ohio, passed away July 27, 2020. She served for many years as an administrative support coordinator in the Department of Political Science.

A Mass of Christian Burial was held July 31 at the Church of the Incarnation. In lieu of flowers, contributions may be made to Day City Hospice, 8039 Washington Village Dr., Dayton, OH 45458.