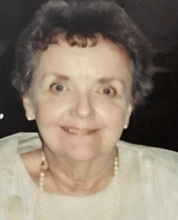 Joan M. Donohue, 87, of Fairborn passed away July 29, 2022, at Hospice of Dayton after a short illness. She was born May 26, 1935, in Lexington, Ky., the daughter of the late Joseph and Mary (O'Geary) Egalite. She was a longtime member of Mary, Help of Christians Church and involved with the Daughters of Isabella.

She was a retired administrative assistant at Wright-Patterson AFB and Wright State University and was also a licensed real estate professional in the Dayton area. Joan enjoyed gardening, water aerobics and especially spending time with her grandchildren and attending their sporting events.

The family will receive friends on Tuesday August 9, 2022 from 6–8 p.. at the Belton-Stroup Funeral Home, 422 E. Dayton-Yellow Springs Rd., Fairborn. A Mass of Christian Burial will be held on Wednesday August 10, 2022, at 11 a.m., at Mary, Help of Christians Church, 954 N. Maple Ave, Fairborn, Father Ambrose Dobrozsi celebrant. Burial will follow at Byron Cemetery. If desired, memorial contributions may be made to Hospice of Dayton or Daughters of Isabella.