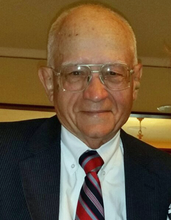 Jerry J. Throckmorton, 84, passed away peacefully on Thursday, August 13, 2020, at his home after suffering from dementia. He was born on Nov. 22, 1935, in West Carrollton, Ohio, to Griest and Helen (Yowell) Throckmorton.

Jerry graduated from West Carrollton High School in 1953, and received his master’s degree from Miami University. One of the founding faculty at Wright State University, he was an associate professor teaching accounting and computer programming for 16½ years at WSU. He had his own CPA practice and ran his own business, Throckmorton Bros. Inc., and numerous garden centers, with his brother Don.

Memorial contributions in Jerry’s memory can be made to Hospice of Dayton, 324 Wilmington Ave., Dayton, OH 45420, or hospiceofdayton.org/donations/, or you may contribute to the Alzheimer’s Association at alz.org/donate.