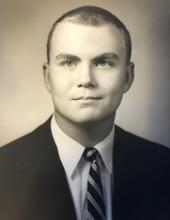 In retirement, Jim moderated various courses at the University of Dayton Osher Lifelong Learning Institute. A creative thinker, he developed interdisciplinary courses for W.S.U., delivered papers on sea literature for the American Popular Culture Association, and designed original topics for the annual symposium about Culture on the Ohio Frontier. He directed the first play at W.S.U. and taught the university’s first courses in African American literature and gender studies. A proud Buckeye, he composed a widely distributed pamphlet on Louis Bromfield, and he served on the board of the Piatt Castles. An avid bibliophile, Jim was happiest when surrounded by his books; he read several works a week and enjoyed discussing them in book clubs. He was Trustee Emeritus of the Ohioana Library Association in Columbus. A prolific poet, he performed local readings with Emily’s Boys, and he reviewed his own life in his personal narrative poems which he shared with the Wright Library Poets. Jim was a people-person and extrovert, as his pool buddies at the Marriott Health Club would attest. Many of his former students and colleagues became lifelong friends. He was a peace-lover, influenced originally by his Quaker high school, later by his participation in the Peacemaking Committee at Westminster Presbyterian Church, and throughout his lifetime in other informal groups.

Jim was the devoted and loving leader of his family. As son, he welcomed his mother Marye into his home for 27 years. As husband, he shared many interests with Betsy — literary, visual, and performing arts; fellowship with friends from their church and from their schools; European travel adventures. As father, he took genuine interest and pride in the education, activities, accomplishments, and philosophies of Hilles and Brad. As grandfather, he joyed in four more opportunities to witness the wonders of personal growth in Jasmine, Adam, Matthew, and Helen.

Private family services. Memorial contributions may be made to the James Hughes Humanities Scholarship at Wright State University or to the Ohioana Library Association.