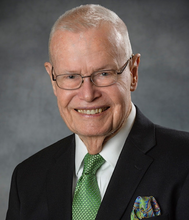 Gordon L. Wise, 88, of Piqua, died on. Friday, Sept, 23, 2022, in the comfort of his home. He was born Feb. 28, 1934, in Troy, to the late Herman L. and Rosa (Landis) Wise. Following a common practice of that era, he was born “at home” so the phrase “And to think that it happened on Mulberry Street” is very accurate. He is survived by his wife of 39 years, Susie Liddy Wise — his “Sweetheart Susie.” They packed decades of excitement, love, travel, and service into their lives together.

Gordie was a 1952 graduate of Houston High School where he was captain of the 1952 Shelby County Sectional basketball championship team (and a very undistinguished first-baseman for the baseball team), he received both a B.S. and an M.B.A. degree from Miami University. He was a member of Delta Sigma Pi and Beta Gamma Sigma. Work toward a doctorate was done at Indiana University. His professional life was largely spent in the college classroom. He retired in 2012 after 51 years as a college professor – a career opportunity he considered to be a total blessing and a major contributor to living a long and happy life. This included 46 years teaching in the College of Business at Wright State University. He had also taught for five years at his alma mater, Miami University, before coming to Wright State University in 1966. Prior to that he was a physical education and social studies teacher and coach at Springcreek School, a position he considered “not a job, just going out to play with many little brothers and sisters!” His college professor career saw him rise through the ranks from instructor to assistant professor, and associate professor to professor before he became an emeritus professor of marketing following retirement. Along the way he won numerous awards for teaching, research (scholarship), and service both internal and professional.

For well over 30 years, he was a marketing researcher and consultant to many businesses, non-profits, and over 60 school districts in Ohio and beyond including key roles in researching, planning, and executing campaigns in Piqua for bond issues, operating levies, and one very exciting school board campaign. He was a key strategist in the 1978 bond issue campaign that built the Piqua High School, after four previous failures.

In 2019 Gordie was inducted into the Wright State University Athletic Hall of Fame. He was “present at/before the creation” of the athletic program at WSU, having served on the original committee that studied, and recommended, the creation of an athletic program. He drafted the original constitution for an Athletic Council, was the first chair of that Council, served on the Council for 21 years, and served as the WSU “Faculty Athletic Representative” to the NCAA for 19 years. When Wright State began its men’s basketball program, he became the first public address announcer, a position he held for 49 seasons before retiring in 2018. His claim to have the “best seat in the house” was indisputable and he always welcomed fans to “another exciting night of Raider Roundball.”

The 1980s saw him host a Sunday night radio program of traditional New Orleans jazz for nine years on stations WPTW-AM and WCLR-FM playing music from his own collection.

He was co-founder and general manager of the Piqua Fastballers, a top Ohio men’s major fastpitch softball team that hosted some of the nation’s and world’s finest teams (won a few times) both here in Piqua and on the road or in tournament action. The Fastballers twice captured Ohio state men’s fastpitch titles and were able to compete in the 1985 International Softball Congress World Tourney in Wisconsin and in the 1986 ASA National tourney in Washington and in Missouri in 1987. Piqua’s schedule was always loaded with top teams, frequently featuring great players, both American and International. The two best pitchers (arguably) — Ty Stofflet (LH) and Jimmy Moore (RH — in modern fastpitch softball history both appeared in Piqua with their teams and faced the Fastballers at Lower Mote Park. Many teams with great Kiwi (New Zealander) players also visited Piqua to play the Fastballers.

Gordie’s involvement with the International Softball Congress with the Piqua Fastballers led to his appointment to the ISC Board and as the commissioner of a newly-founded ISC league, which functioned in Ohio and later in Ohio and Indiana. He also served the ISC as their director of marketing for many years as well as director of communications, a position from which he wrote many articles and stories that appeared in fastpitch circles nationally and internationally. In 2008, he was inducted into the ISC Hall of Fame.

He holds the totally unique distinction of having captured the intramural basketball free throw shooting championships of no less than three universities: Miami University, Wright State University (three times) and Indiana University, where he hit 97 of 100 to win (and that number is honest — he could show you the article from the IU student newspaper!). His “secret” for free throw shooting success? He shot them underhand, an old basketball technique he learned in the seventh grade!

In earlier years, he was a long-time Sunday School teacher and deacon at Piqua Baptist Church, he was involved in key roles in two church building efforts at Piqua Baptist and again at The Family of Grace United Methodist Church. As a former president of the Piqua Association of Churches, he wrote a series of articles on the history of most of the community’s churches for the Piqua Daily Call.

For the past 24 years he has mentored over 90 teenage boy felons at the West Central Juvenile Facility.

First and second grade students at High Street and Washington schools have benefitted from his tutoring in reading. He received the 2015 “Friend of Piqua Schools” award. In 2016, he was honored by the Piqua Chamber of Commerce with the Order of George award, the community’s highest service award. He was involved with numerous local and area organizations as a longtime member of the Board of Directors of Health Partners Free Clinic; served on the community Diversity Committee when it existed; for many years the Piqua schools Superintendent’s Executive Advisory Committee, and the Grow Piqua Now Marketing Committee. Additionally, he was a founding member of the Awesome Piqua Organization, and was a member of the Piqua Compassion Committee Board of Directors.

His role of dad and later grandad were huge parts of his life. For years he drove “Grandad’s school bus” for his six local grandkids. He was an ardent Christian, a lover of sports, music of many sorts, friends and family, his high-achieving grandkids and the growing crew of great-grandkids, his Wright State Raiders, and his beloved Susie.

A service to honor his life will begin at 2 p.m. Saturday, Oct. 1, at the Jamieson & Yannucci Funeral Home with Rev. Fr. Thomas Bolte officiating. Visitation will be held from noon-2 p.m. Saturday at the funeral home. Private burial will be held at Forest Hill Cemetery. Memorial contributions may be made to Health Partners Free Clinic of Miami County, 1300 N. County Rd. 25A Troy, OH 45373, or Hospice of Miami County, Inc. 3230 N. County Rd. 25A Troy, OH 45373.

Guestbook condolences and expressions of sympathy, to be provided to the family, may be expressed through the online obituary.