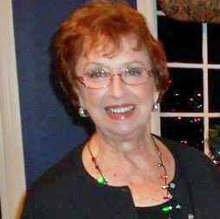 Donna S. Courtney, 86, of Washington Township passed away peacefully on March 14, 2021, at the Centerville Health & Rehab Center. She was born on April 12, 1934, in Dayton, Ohio, to Ancil Smith and Georgia (Harper) Smith.

Donna attended West Carrollton Schools where she met the man who would become her Husband, Jim Courtney. Upon graduation, she decided to attend Miami University – Oxford to continue her education where upon she received her Bachelor's Degree in Business and then began her teaching career at West Carrollton High School teaching Business and Office education.

She continued her education at Miami University to obtain her master’s degree. After teaching nine years at West Carrollton, she then accepted a position in Warren County as the Vocational School was being built. She worked to design and implement the layout for the Business Education and Distributive Education portions of that school. As the supervisor over these areas, she hired the staff and continued as the supervisor of Business Education and Distributive Education for that site for nine years.

A Celebration of Life will be held at a later time. In lieu of flowers, memorial contributions may be made to Ohio’s Hospice of Dayton in Donna's memory. Arrangements entrusted to Swart Funeral Home, West Carrollton. Expressions of sympathy, love, and thinking of you cards may be sent to The Family of Dr. Donna Courtney, C/O Swart Funeral Home, 207 E. Central Ave., West Carrollton, Ohio 45449.