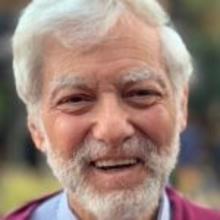 Don was born in Cleveland, Ohio, on March 21, 1938, to Benjamin and Rhoda Jacobson. After graduating high school, he spent a happy, meaningful year in Israel living at a kibbutz before attending Case Western Reserve University. Don obtained a master's degree in library sciences. He then worked as a reference librarian and instructor of library administration at Wright State University. In 1973 he relocated his family to Texas to accept a position with the city of Fort Worth. He served faithfully as a reference librarian for the city of Fort Worth until his retirement in 2006.

Don was a very kind, well-read man who was intensely interested in the world around him. Don was preceded in death by his parents; his late wife, Nancy; son, Jonathan; and sister, Edith. He is survived by his wife of 20 years, Kathleen; son, Benjamin (Julie); daughter, Simona Jacobson; stepsons, Stanton, Stephen, Martin and Quintin (Melinda) Cargill; brother, Harvey Jacobson; granddaughters, Alexia and Amanda Jacobson; grandsons, Christopher, Brendan, Joey and Andrew Jacobson and Matthew Shoenfeld.