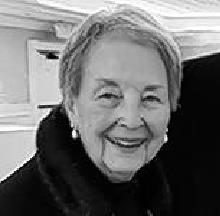 Crete grew up in Dayton, Ohio, with her three sisters: Athena, Magdalene, and Helen. They were instrumental and a fixture in the Greek Community. Crete worked at the famous Polar House, owned by her father Michael after he immigrated from Greece, then to Pittsburgh, Cleveland, Ohio, and then to Dayton, along with her mother Martha. There she met her husband Robert as he was lingering around to win her affection and a long term relationship. He succeeded and they eventually got married and had a beautiful daughter, Linda.

She eventually became assistant to the president of Dayton Malleable Iron. Upon her retirement, she joined Wright State University and became a director in the establishment of the Nutter Center on the Wright State campus in Fairborn, Ohio. Because of her big personality, she hosted many dignitaries including members of the Dayton Accords ending the Bosnia-Herzegovina wars held at Wright-Patterson Air Force Base and the Nutter Center, Cher, Kiss and Bob Dylan and many others.

A funeral service will be held at 11 a.m., Wednesday, Dec. 8, 2021, at the Tobias Funeral Home, 5471 Far Hills Ave, Dayton, OH 45429. Visitation will be held from 10 a.m. till service time at the funeral Home. Rev. Dr. Brian Maguire officiating. Interment Woodland Cemetery in Dayton.