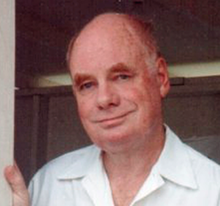 Adrian Rake, 76, a former faculty member and researcher in the Department of Biological Sciences, passed away Nov. 13, 2010. Rake relocated to Saint Croix in the Virgin Islands in 1998, but he always had a special fondness for Wright State, his many graduate and undergraduate students, and his colleagues. He was a founding member of the WSU Retirees Association in 1993.

A Fellow of the American Association for the Advancement of Science, Rake began working at Wright State in 1975.

Following his U.S. Army service, Rake used the GI Bill to attend Swarthmore College and the University of Pennsylvania, where he received his doctoral degree. He received an additional degree and certification as a registered nurse while teaching at Pennsylvania State University in the early 1970s, and was a volunteer with the International Red Cross. He and his wife, Constance, provided assistance after natural disasters throughout the United States, and Rake also served in the war-torn nation of Chad, in Central Africa, in the 1980s.

Known as “Dean” to his family, Rake and his wife came to Saint Croix to provide medical and social services for the Red Cross after the devastation of Hurricane Hugo in 1989. They immediately fell in love with the Virgin Islands and its people and made Saint Croix their adopted second home. Following the death of Constance in 1997, Rake relocated permanently to the island.

He re-met and married a high school friend, Felicia Gomes, in 2006, and both of them made their home near Great Pond until Felicia’s death late last year.

Contributions in Adrian Rake’s memory may be made to the Wright State University Foundation, College of Science and Mathematics.