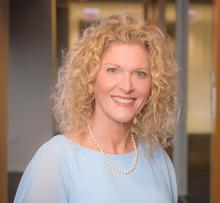 Lisa Bohman Egbert, M.D., was re-elected vice speaker of the American Medical Association (AMA) in June 2022. She first served as the student representative to the AMA Women in Medicine Advisory Panel, then as a member of the AMA Resident Physicians Section Governing Council before becoming chair of the AMA Young Physicians Section. Subsequently, she served on the board of AMPAC, the AMA’s political action committee, and on the AMA Council on Medical Service before her election as vice speaker of the AMA House of Delegates.

Dr. Egbert is a founding member of Launch2047, a Columbus, Ohio, based subsidiary of the AMA’s Health2047, and is excited to help launch the cutting-edge innovations developed by Health2047.

Colleges and Schools » Medicine
Share to:
Log in to submit a correction for this event (subject to moderation).