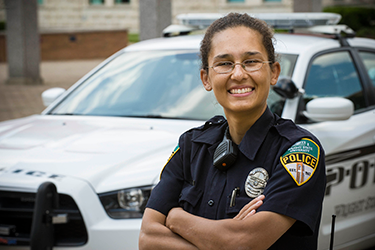 The department currently has 19 sworn officers, including the Chief of Police and a Lieutenant. These officers meet all state police training requirements and derive their police authority as provided in Section 3345.04 of the Ohio Revised Code. Officers are on duty 24 hours a day, seven days a week, patrolling the campus in marked cruisers, on foot and bicycles. Officers can be reached 24 hours a day through our Communications Center in 060 Allyn Hall.

In addition to the patrol division, other department units include: crime prevention, police records, administrative and support services, communications center, and investigations. The department also provides police and security coverage to the Ervin J. Nutter Center, a sports and entertainment complex serving the Southern Ohio Region.

The department looks forward to continuing to fulfill its mission of providing a safe and secure environment for students, faculty, staff, and visitors of Wright State University.