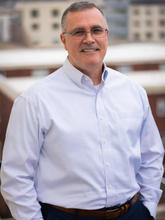 Ricky Peters is the CEO of Tangram Flex, a Dayton software company focused on rapidly integrating systems with embedded software. Before joining Tangram Flex, he was the CEO of Ascend Innovations, a joint venture between Kettering Health Network, Premier Health, and Dayton Children’s Hospital.

Peters previously served for 35 years as a civilian leader in the Air Force, retiring in 2015 as the executive director of the Air Force Research Laboratory. He was responsible for leading a workforce of 10,000 and guiding the Air Force’s $2.5 billion science and technology program and an additional $2.75 billion in customer-funded research.

A native of New Lebanon, Peters resides in Brookville with his wife, Sheri, who earned a master’s degree in biomedical engineering from Wright State.