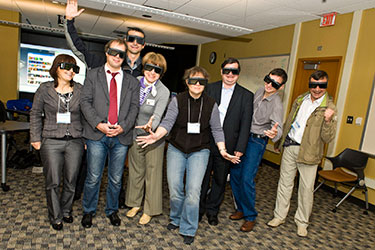 Hosting allows Daytonians to make friends from around the world, experience different and exciting cultures, as well as hearing first-hand what is happening around the world. The visitors, in turn, take a true perspective of the United States back to their native country in addition to fond memories of generous and hospitable Daytonians.

Nicknamed “the birthplace of aviation,” the city of Dayton is associated with the Wright brothers, inventors of the first practical airplane. The city has retained a strong connection to the industry, and is home to Wright-Patterson Air Force Base and the National Museum of the United States Air Force.

Since 1970, Wright State University's Office of Disability Services has been actively engaged in removing both physical and attitudinal barriers on campus and in the greater Dayton area. Today, we are proud to be one of the only institutes in the country that is 100% accessible.

Wright State University is the site of the Calamityville® Tactical Laboratory project, a state-of-the-art research and training opportunity for civilian and military disaster response teams.

Hospitals in the greater Dayton area have an estimated combined employment of nearly 32,000 and a yearly economic impact of $6.8 billion. Ninety percent of the Dayton region is within 20 minutes of one of the area’s hospitals which consistently earn top national rankings and recognition.

Because the Dayton Council for International Visitors is administered by Wright State University, visitors have immediate and guaranteed access to faculty, staff, and resources. Wright State also has established ties to the University of Dayton, a private, Catholic university, and Sinclair Community College, one of the largest of its kind in North America.

Over the years, many innovative thinkers such as the Wright Brothers have called Dayton home. In that same spirit, Daytonians continue to invent new ways to create a cohesive network among historic districts, societies and preservationists, local and regional governments, the business sector and the Dayton community at large.

Dayton was the first large city to adopt the Council Manager form of government in 1913, and today it is an integral part of the Dayton City Government along with the five-member Dayton City Commission. Visitors have direct access to local officials responsible for managing the organization’s 16 departments.

Ranked #1 mid-size region for new projects by Site Selection magazine, the greater Dayton area has positioned itself as an emerging global technology hub and a center for cutting-edge research initiatives. This convergence has experts calling Dayton the ‘next Silicon Valley’.

As one of the largest 90-minute markets in the country, Dayton represents a logistics location and supply chain hub. Of equal interest is the Greater Dayton Regional Transit Authority with its award-winning hybrid trolleybus system. lane. The city has retained a strong connection to the industry, and is home to Wright-Patterson Air Force Base and the National Museum of the United States Air Force.

A four-member delegation of education officials from the north African nation of Algeria will visit Wright State University as part of a trip to examine the American educational system. The delegation, which will be at Wright State on April 14 and 15, will tour campus, observe a French class and hear presentations on maintaining accreditation and the roles of the Faculty Senate and staff advisory councils.

Disability Issues in the U.S.

Through meetings and site visits with public and private sectors professionals, the program examined requirements, implementation and enforcement of disability legislation, particularly the Americans with Disabilities Act (ADA), at all levels of government, as well as having explored a broad range of programs and initiatives designed to support and enrich all aspects of life for people with disabilities. The role and impact of non-governmental organizations in providing critical services and expanding active participation and inclusion of disabled persons was emphasized.

Diversity, Pluralism and Civil Rights in the U.S.

Ms. Dominique Hill visited Dayton in a program used to address racial, religious, and ethnic diversity of American Society and to explore the nature of political participation on the part of ethnic minorities.

Several universities participated in a program to promote a better understanding of American society and American studies, as well as the role that U.S. libraries play in building a strong democratic society.

The Changing Face of Education in the U.S.: Training a Skilled Workforce

Development of University Partnerships for the Promotion of Innovation

Six university leaders from across Russia visited Dayton to explore how local universities tap into local governmental and industrial incentives for research. These visitors met with university department heads and industry leaders, including GE Aviation.

Judges and top government officials from Iraq spent time with city officials to understand how Dayton creates transparency and accountability at the municipal level. This delegation also met with appellate court judges for a roundtable discussion on the judicial system.

The Dayton Regional Transit Authority was the subject of a case study on transportation planning and finance undertaken by a delegation of government officials from Turkmenistan.