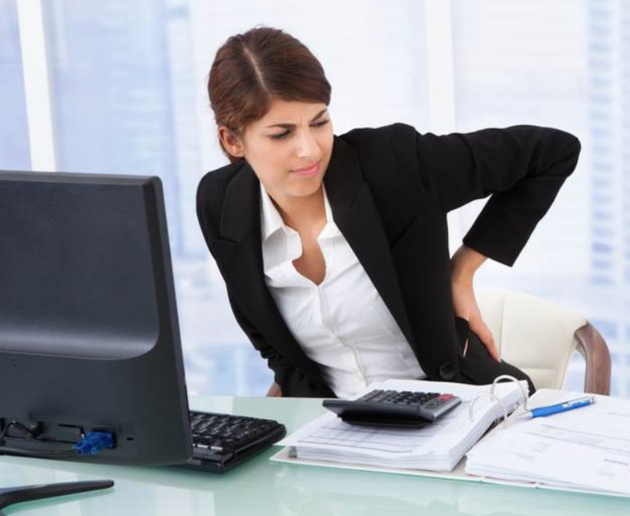 Great advice from our friends at Safe Bee

Taking a seat may seem like second nature, but how you sit can really change the way your body feels, especially your back and hips. That pain in your shoulder, that twinge in your back — it may all go back to the way you sit.

Would you rather be sitting pretty? This advice should straighten you out.

Crossing your legs most of the day. Sitting with your legs crossed once in awhile isn't the danger you might think it is, says Eeric Truumees, MD, an orthopedic spine specialist in Austin, Texas, and a spokesperson for the American Academy of Orthopedic Surgeons. "I would never say 'Never cross your legs,'” he says. Some other experts agree, with the caveat that you sit that way no longer than 10 to 15 minutes at a time.

But making a habit of it isn't a great idea since it puts stress and pressure on the hips, according to Tuumees. Other experts suggest it contributes to neck and back pain and varicose or spider veins — unsightly starbursts of tiny enlarged veins.

A family history of varicose, or enlarged, leg veins or a job that forces you to stand most or all day — such as waitressing, hairdressing or dentistry — are more likely to result in varicose veins than sitting cross-legged, Truumees says. For people who can’t avoid long-term standing, he says, support hose are more likely to help you avoid those unsightly veins than changing the way you sit.

Using a chair that’s too high or low. When you're sitting at a desk, aim to keep your knees roughly level with your hips. This will let you keep what Truumees calls “a more neutral back alignment” so that your back muscles won’t have to work as hard. If you sit in a chair that’s too low, forcing your knees above your hips, that can put a lot of pressure on your spine. It's not bad for a short period of time, Truumees says, but sit that way all day and you could be aching by quitting time. If you sit with your hips higher than your knees — like being perched at a bar stool for happy hour — that also puts too much stress on the back over time, Truumees says.

Hunching. For those of us who work at a computer all day, it may feel good to slouch a bit as we get tired. But hunching over causes the muscles in your chest to contract and shorten, which contributes to a stiff chest and a weak back. Here’s a quick tip from the Association of Orthopedic Surgeons: If you feel yourself hunching over, line up your ears with the tops of your shoulders (so your head is not pushed forward), then line up your shoulders with your hips. Keep your upper arms relaxed but close to your body.

If you find yourself scrunched up in your seat again, shift your hips and knees back to the same plane. After that, you can align the rest of your body.

Hands above your elbows. Keep your hands and wrists in a straight line with your lower arms. If they’re higher, it causes muscle strain and can contribute to repetitive strain injury (RSI) in the hands and/or arms — a condition that requires medical treatment and can make it hard to lift things or even use a computer.

Leaning on your elbows. If your parents told you to get your elbows off the table, they may have done you more of a favor than they realized: It may have saved you from an exquisitely painful condition known as elbow bursitits. Leaning your elbows on the table irritates the small, slippery sacs (bursae) in your elbow that serve as cushions between the bones and soft tissues; if they swell or leak, it can lead to bursitis.Once in a while, the sacs can get infected and cause the skin around them to get warm and red. This requires immediately treatment, since the infection can creep into the bloodstream and contribute to a serious illness.

Top of computer screen above eye level. As you tilt your head up or down to see the words, this can put extra stress on the neck and result in neck pain over time. Holding a phone between your ear and shoulder as you type on the keyboard is also likely to leave you with a painful crick in your neck.

You sit too long. Sitting too long has been linked to everything from heart disease to cancer, obesity and "bad" cholesterol, and it may take years off our lives even if we exercise regularly.

How to combat sitting problems

Take more breaks to move around. Even 15 minutes of walking twice a day will improve your health. During a busy day, instead of scheduling breaks based on the clock, Truumees suggests an alternate plan. "Do what you need to do at your desk," he says, "and then return phone calls with your headset on and walking around the office."

Standing desks and walking meetings: The new “feel-good office” offers some alternatives to the traditional desk chair. Standing desks are popular among some workers, and Truumees says patients with back issues often find them useful.

Or consider “active sitting," which requires you to use your core muscles. Sitting on a large exercise ball (aka a stability ball) is one way to do it. They're good for forcing you to sit straighter while engaging your core. However, Truumees finds many people soon grow tired of the novelty and give them up.

Instead, he says, you might just try a "walking meeting." Your coworkers and boss may be just as tired of sitting as you are, so see if you can discuss some issues over a good stroll. No notebook or desk needed — just remember to jot down some notes on your smartphone and add to your to-do list after the meeting.