The Student Affairs Staff Development Committee is proud to provide you with this newsletter as a mechanism for keeping you informed. In this newsletter, you can expect to find announcements from the VPSA, information about upcoming professional development opportunities, various campus and divisional events happening on and around campus, staff accomplishments, and other exciting news about your colleagues. We will also look to include other items that may be of interest to Student Affairs professionals as they arise.

Please be on the lookout for future editions of your newsletter.

The Funding Form is currently available on the Staff Development Committee's website (via the VPSA's website). All applications will be considered; however, preference will be given to those who have been unable to engage in any professional development opportunities within the past two years, have a significant financial need due to lack of departmentmal or external funding options, and can demonstrate how this opportunity will benefit their professional development, their department and/or the University in general.

The SOCHE ED conference will be held on Friday, April 15, 2016 at the Dayton Art Institute.  Major topics will include: (1) implicit biases and microagressions; (2) big data in understanding student experience; (3) civic collaborations on campus and in communities; (4) museum tour; and (5) more!  For further details, visit www.socheed.org. The Office of the Provost provides financial support to pay the registration fee for Wright State employees to attend SOCHE events. When registering, select PAY BY INVOICE, and complete the information as follows:

Co-sponsored with Adventure Summit and Office of Disability Services

Co-sponsored with Honors Institute and Office of Disability Services

This session is targeted towards Student Affairs staff in order to offer insight into the challenges involving the exercise of first amendment rights on our campus.

These and other questions will be addressed at this broad-ranging panel discussion.  Mark your calendars for this informative training opportunity.  We hope to see you there!

Staff in the Division of Student Affairs may request tickets for themselves and immediate family members by emailing Sue Rader no later than Thursday, January 7.  Attendees will also receive a $5.00 voucher for use at concession stands.  Tickets will be available for pickup January 12-15 from 9 a.m. to 4:30 p.m. in the Athletics Administration Office (Nutter Center third floor, just inside the Berry Room Entrance).

Spectrum Sessions are presentations designed to be customizable for a range of audiences and topics. Spectrum Sessions are developed to give different audiences a brevity of skills and knowledge within a short amount of time.  Petey Peterson will be our guest speaker and will share ideas and information about how we can support Transgender Students & develop additional skills necessary to support LGBTQA+ students, faculty & staff at Wright State University.

Emma Hovarter has been named Ticket Sales and Service Associate in the Athletics Department, replacing Micki Ford, who moved to Northern Kentucky University.

Sue Rader, Accountant, has moved to the Athletics Department and is no longer at the Nutter Center.

Dr. Kim Gilliam is moving to the Boonshoft School of Medicine Office of Student Affairs and Admissions and will no longer be at the Career Center.

Announcing the birth of Howard Paige Webb, first child of ODS Director Thomas Webb and his wife, Becca Webb. Howard was born on December 2, 2015; he weighed 6.14 lbs. and was 22 inches. Congratulations to the Webbs! 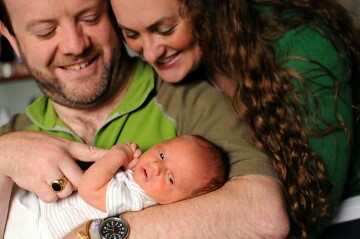 Congratulations to Chris Taylor, Director of Community Standards & Student Conduct, who received a Ph.D. in Educational Leadership with an emphasis on Student Affairs in Higher Education from Miami University on December 11, 2015.  Taylor’s dissertation was titled “Bros Like Me: Adherence to Male Role Norms in Fraternity Men.”

Congratulations to these Division of Student Affairs employees who are achieving service year milestones!  We appreciate you and value your committment to Wright State University and the students we serve! 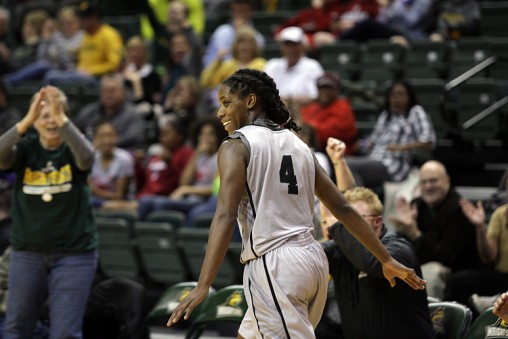 Congratulations to Wright State Raiders’ Senior Guard, Kim Demmings, who made the Top 50 Watch List on Thursday, December 10, 2015 and is now in the running for the Naismith Trophy recognizing the top College Basketball Players of the Year. According to the article on Raiders.com, “the early season watch list will be reduced to the midseason 30 on February 11, with the 10 semifinalists named on March 2.  The four finalists will then be announced on March 20 with the winner to be announced on April 3 during the Women's Final Four in Indianapolis.”

In November, Demmings broke the Wright State Women’s Basketball scoring record of 2,055 career points.  As of December 2015, she was second in Division I, leading the nation in attempted field goals, and third in the nation in successful field goals. Demmings was named Horizon League Player of the Week on November 23rd and November 30th; and High-Major Player of the Week by College Sports Madness on November 23rd.

For more detailed stats on Demmings and to find out more about the Naismith Trophy, see the complete article on Raiders.com, Thursday, December 10, 2015: “Demmings Named to Naismith Watch List” http://www.wsuraiders.com/ViewArticle.dbml?DB_OEM_ID=27000&ATCLID=210574710 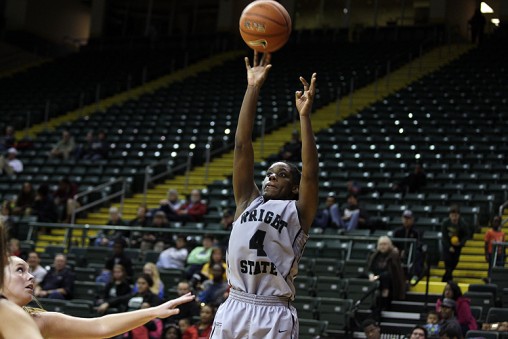 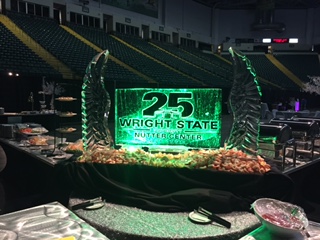 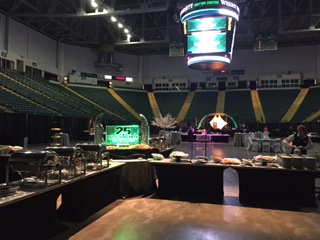 In September 2015, members of the Division of Student Affairs participated in the first annual Dessert Wars competition.  Fourteen contestants entered deliciously decadent dishes, and the entire division was invited to taste all of the desserts and cast a vote for their favorite.  After a pleasant hour of tasting and deliberating, the winner was announced.  Jack Pence’s “Rowdy’s Pumpkin Patch Pizzazz” was the named the winner.  Said Jack, “It was great to hit the ‘pause button’ during the week and gather and share the company of the rest of the SA Division.” 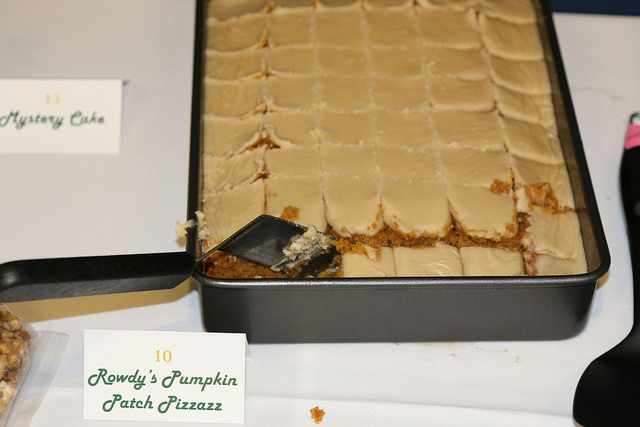 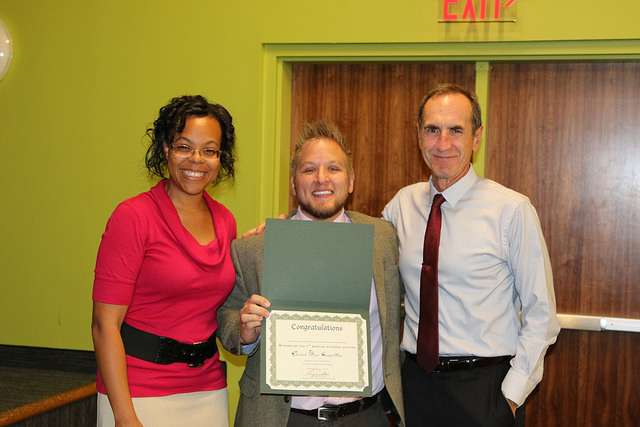 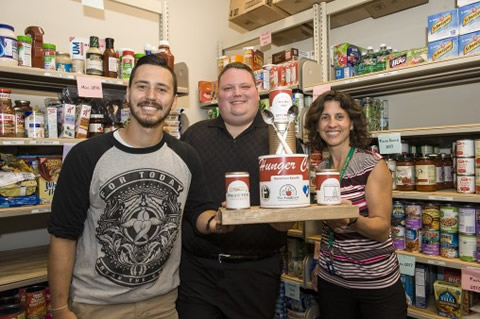 The Rowdy 500 food drive joined forces with the first Hunger Cup competition this fall. Rowdy 500 typically sets the goal of collecting 500 donations for the Friendship Food Pantry.  By participating in the Hunger Cup, Wright State battled the University of Dayton in a contest to collect the most meals for donation. The results of the competition were measured by the number of meals collected, with $1.00 having the ability to provide a meal for a family of four and 1.2 pounds of food providing one individual meal. In the end, the University of Dayton was able to donate 2,845 meals, while Wright State donated 6,877 meals, making WSU the winner of the first Hunger Cup! The award was presented to the Friendship Food Pantry, the donation location for all food items collected at Wright State.

The Friendship Food Pantry is located in 134 Allyn Hall and is open to any Wright State student who is currently enrolled in classes. Any such student can utilize the resources of the food pantry once per month, unless a special circumstance allows additional provisions. For hours and additional information, contact Carine Verlin at (937) 775-2495. 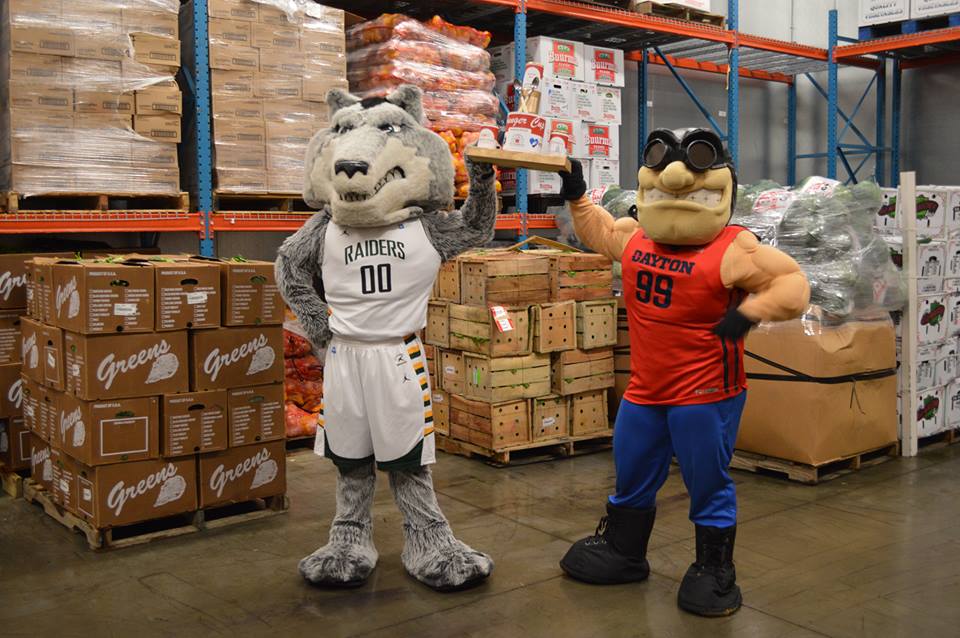 Whether looking for a place to work, relax, exercise, enjoy a meal or just have fun, the Student Union has it all.  And with all of the events taking place, as well as the meeting rooms and conference facilities available, there is no shortage of things to learn and people to meet.  Wright State's Student Union was featured on the Wright State Newsroom on October 14, 2015.  Read the article here: http://webapp2.wright.edu/web1/newsroom/2015/10/14/the-heart-of-campus/ 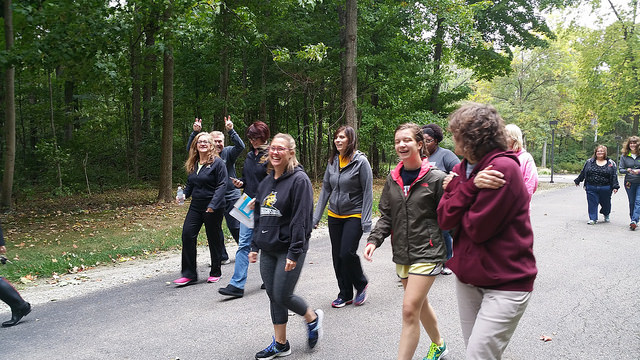 On crisp cool Friday, October 2nd, 2015, a group of Student Affairs staff met at the Student Union Recreation Desk to embark on the 1st Annual Student Affairs October Walk. Sharing lively conversation and laughter with colleagues, employees enjoyed the brisk one-mile walk around campus.  Participants donated 8.2 pounds of food to the Wright State University Friendship Food Pantry.  Consequently, the healthy turnout for the October Walk provided wonderful health benefits of fresh air and friendship for the participating employees AND nutritious health benefits for the Friendship Food Pantry as well! Everyone had such a good time, that plans are in the works to schedule similar walks in the future – perhaps with a different route, some trail mix snacks, surprises, and other various enhancements.

Division of Student Affairs Gives Thanks 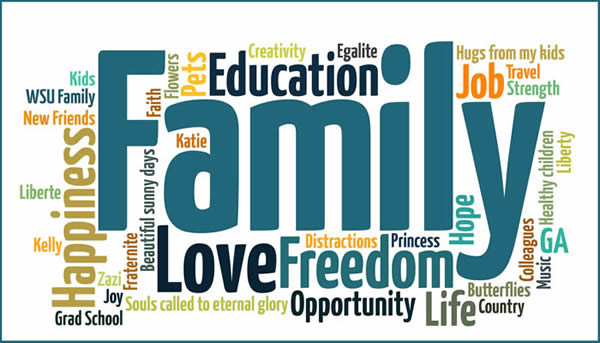 The Staff Development Committee hosted a Thanksgiving Potluck on Tuesday, November 17, 2015.  This event took the place of the Progressive Lunch from years past.  Members of the division donated non-perishable food items and gift cards to the Wright State Friendship Food Pantry to be used to fill Thanksgiving baskets for Wright State students in need.  A total of $135.00 in checks and gift cards was donated, as well as 80 pounds of food.  Thanks to all who so generously gave.  Staff also took the opportunity to write thank-you cards to remind themselves of the things for which they were thankful and to write notes of appreciation to others.  To top off the festivities, staff enjoyed a bountiful feast of comfort foods and a plethora of desserts.  The banner displayed below depicts the many things for which the Division of Student Affairs is thankful. 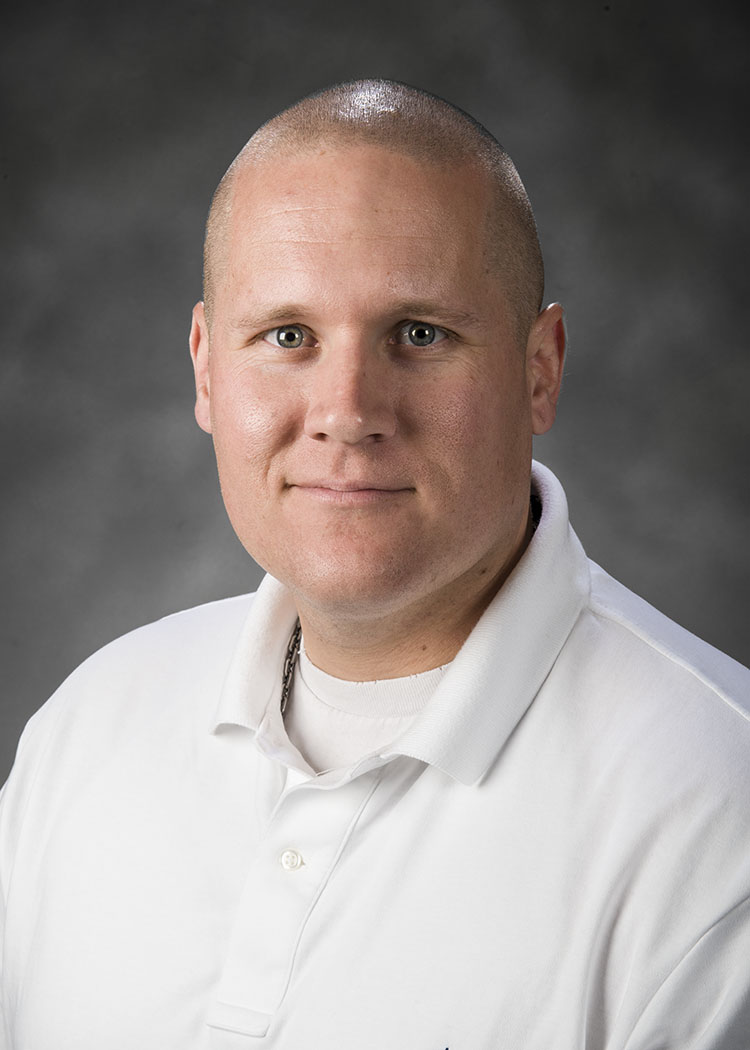 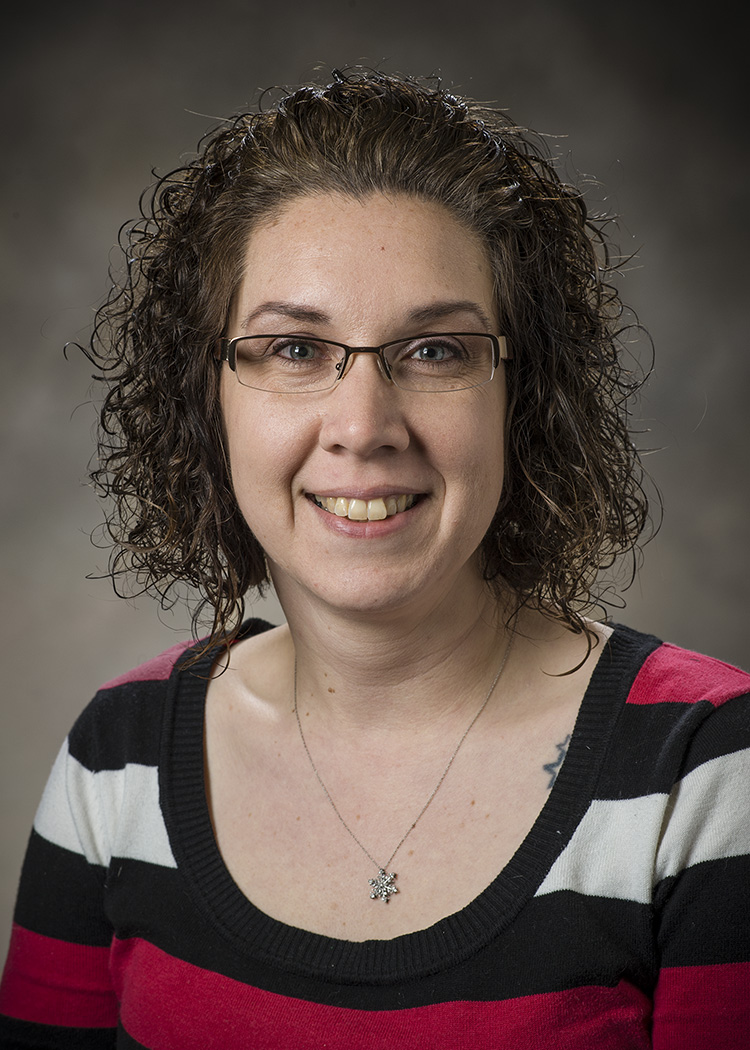 Tara Lynn Armstrong-Wilson
Tara Lynn Armstrong-Wilson began her employment with the WSUPD on February 9, 2015. Tara, a native of Xenia, Ohio; Tara and her husband Jason enjoy their two daughters Allison and Abigail. Prior to her employment with the WSUPD, Tara was employed as a full-time leasing agent for Samaritan Properties (The Highlands) in Fairborn, Ohio. Prior to working at The Highlands, she was a dispatcher with Waste Management in Fairborn, Ohio for 14 years. We are happy she has decided to at WSUPD. 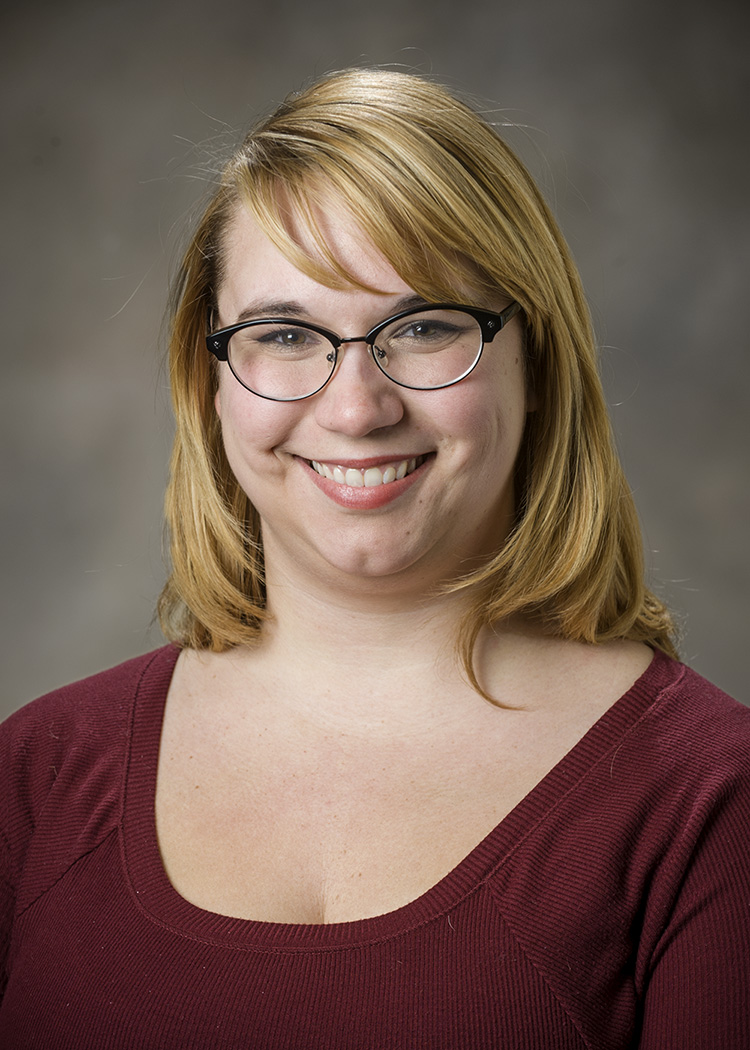 Rebecca A. Auman
Rebecca Auman started employment with the WSUPD on February 23, 2015. Rebecca, a native of Dayton, Ohio; Rebecca is our newest Communications Center Operator. Prior to her employment with WSUPD, Rebecca served the City of Huber Heights Police Department as a full-time Communications Officer for over 3 years. In 2010, she received her Bachelors of Arts degree in Liberal Arts from Mercer University in Macon, GA. While she was a student at Mercer University, she served as a Resident Assistant during her tenure. We are happy she has decided to work at WSUPD.

Sarah began her internship at Counseling and Wellness Services over the summer and hails from California. She is passionate about working with individuals as they transition into adulthood and has a special interest in creating outreaches that promote social justice, healthy sexual behaviors and consent, and self-care practices. Sarah is working as the liaison to the Veteran and Military Center this year and is enjoying the collaborative process of coming up with programing for our veteran students.

Rebecca Clarke has joined Counseling and Wellness Services (CWS) as a Psychology Intern for the 2015-2016 school year.  Rebecca has spent the majority of her educational career with WSU earning a bachelors in Psychology in 2010.  Rebecca joins CWS following completion of coursework at Wright State University School of Professional Psychology.  Rebecca is excited to spend the next year at CWS participating in a range of mental health, wellness, and prevention services on campus. 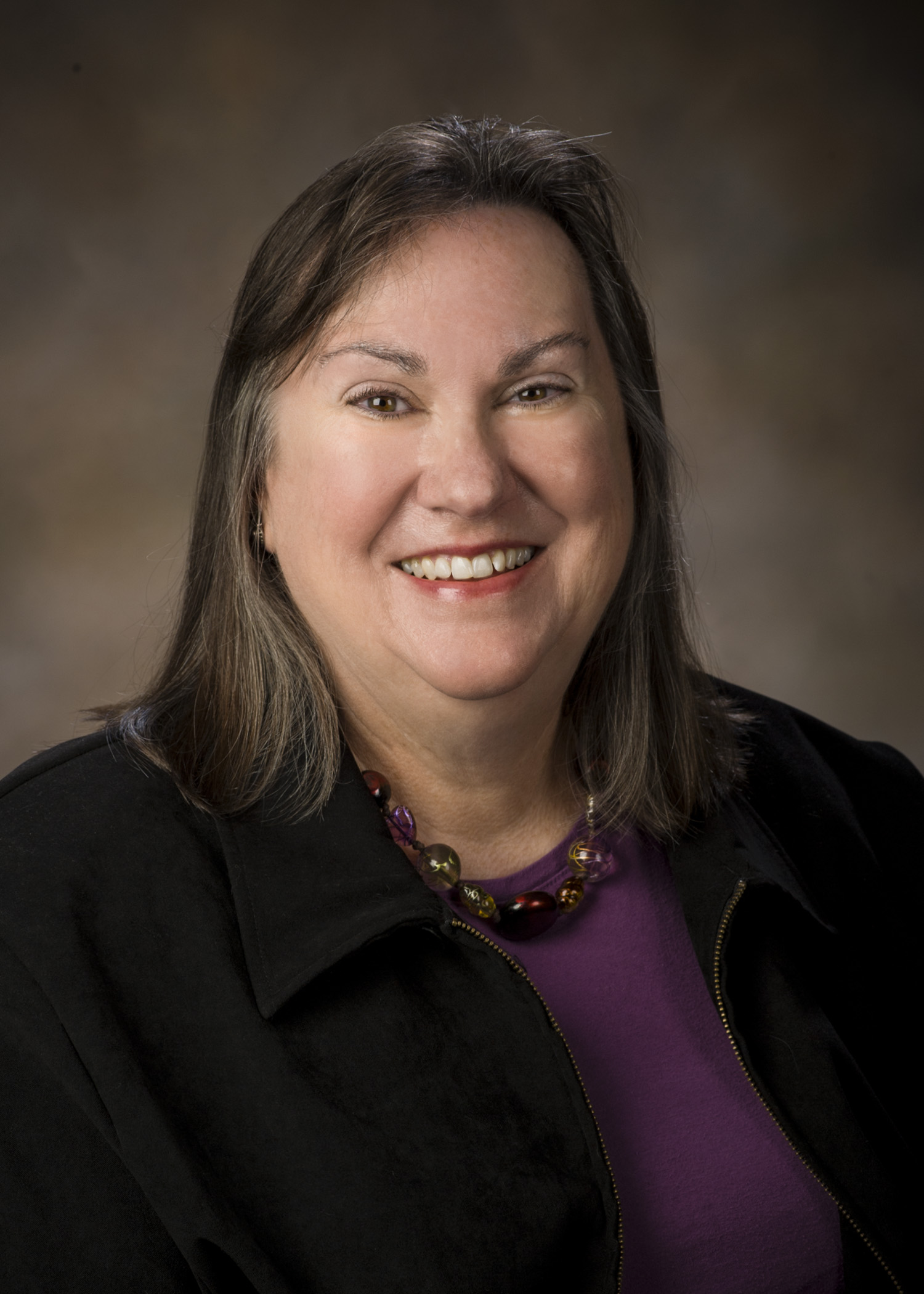 Lisa Burke has moved to the Office of the Vice President to assist with divisional business and financial operations after succeeding as the Accounting Clerk for Student Union and Campus Recreation since September 21, 2005. Lisa has been in the Dayton area since 1989 after spending five years in High Wycombe, England, where her husband was stationed with the U.S. Air Force. She has two wonderful daughters, two dogs, one grand dog, and last but not least, a grand tortoise.