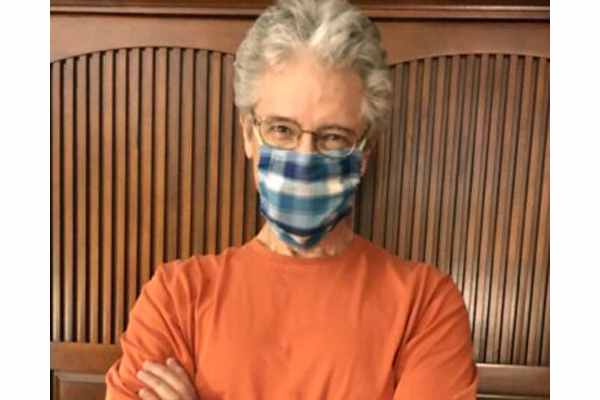 Two weeks ago, Yellow Springs News editor Megan Bachman spoke with local physician Dr. Stuart “Skip” Leeds by phone to get his take on COVID-19 in the state of Ohio and Yellow Springs. He addresses masks, Ohio’s reopening plan, early pandemic projections, the possibility of a second wave and local responses to the threat.

Dr. Leeds is an Assistant Professor of Family Medicine at Wright State University School of Medicine and a member of the Wright State Physicians COVID-19 Task Force. He has been a family physician since 1998, and currently lives in Yellow Springs.

Yellow Springs News: You wrote a strongly worded letter to Gov. DeWine criticizing his about face on mandatory masks. Can you say more about that?

Dr. Leeds: Nothing about what I said there has changed. [DeWine] has adopted a soft libertarian approach, trusting that people will do the right thing if you ask them. You need only to spend three minutes at a Kroger to know that is not true.

Yellow Springs News: And what about the reopening? Do you think it’s happening too quickly?

Dr. Leeds: It doesn’t have a scientific basis. The math says, stop, don’t do this. It seems like the working hypothesis is that the virus is like a home invader, knocking, scratching at your door. Then when it feels like no one is home, it stalks off and you can come out. That is the model, and it has to do with our faulty human threat analysis. We’ve done so well and we’ve lowered the fatality rate. We think we have to wait it out until you’ve drained the virus reservoir, wait until the cases drop to zero, then three days later you can come out. But that’s impossible. That’s never going to happen. Human beings are teeming reservoirs of this virus. You only need one sick person and you start the whole exponential cascade over again. To further complicate matters, this virus has the annoying property of asymptomatic shedding — making you contagious even before you know you’re sick.

So there is, at best, a “wishful thinking model.”  Though some appear to be working from a more cynical  “social Darwinist” sort of model, which really boils down to: let old people die. The mean age [for fatalities] in Ohio is 80. That’s the center of the bell curve for the vulnerable population. And as soon as we reopen we’re going to multiply deaths by two, three, four times … and our seniors will take the brunt of it.  Though it will take weeks or months for us to see the effects of our policy changes.

We need to understand what we’ve accomplished in the last 10 weeks. As our testing rate in Ohio is abysmal, we only have a little over 30 thousand documented cases.  Let’s be generous and say that the true incidence rate is 10-fold that — so there have been 300,000 cases. In all of Ohio, 300,000 have had this infection. That’s about 3% of the state population.  So all we’ve managed to do is confine the infection to that 3%. As soon as you let up on restrictions, the remaining 97% will be exposed. If, as [Professor Neil] Ferguson and other epidemiologists have said, we should assume that 40 to 70% of the population will eventually be infected…that means we’re about 1/15th of the way through this pandemic.  Let’s be even more generous and say our incidence is really 10%. So instead of 1/15th, we’re really 1/5th of the way through this. Do you feel reassured?

Yellow Springs News: But didn’t we flatten the curve? And avoid 60,000 new daily cases in Ohio?

Dr. Leeds: Here’s a way to understand the flattening of the curve. When you squeeze a balloon, it’s the same amount of air, but it’s flatter. Flattening the curve redistributes the “mass” of cases over time. You make the balloon flatter, but it’s also longer. Total number of cases are conserved. There are two social-distancing strategies you can use in a pandemic: suppression and mitigation. Suppression is: you lock everyone up until it goes away. That’s what China tried to do. We continue until we eradicate the viral reservoir or come up with a vaccine or a viable treatment. Then there’s mitigation, which is flattening the curve and just stretching out the cases over time. It just buys time, and  keeps us from exceeding our critical care capacity. But it’s roughly the same gross number [of cases]. There’s a reasonable argument that this is oversimplified, and that the balloon is “leaky” at the far end. That is, that total cases really are being reduced, because of factors like herd immunity — so when you get between 60 and 90% [of the population infected], the virus is gone. Sweden is trying this. Same population roughly as Ohio. But they have nationalized healthcare in Sweden. Sweden has a far greater sense of community and collective responsibility than the US. Let’s really do Sweden if we’re going to do Sweden. And I feel compelled to point out that, for all that,  the Swedish experiment appears to be failing. Their fatality rate is unacceptably high, with an immunity rate around 8%, last I looked.