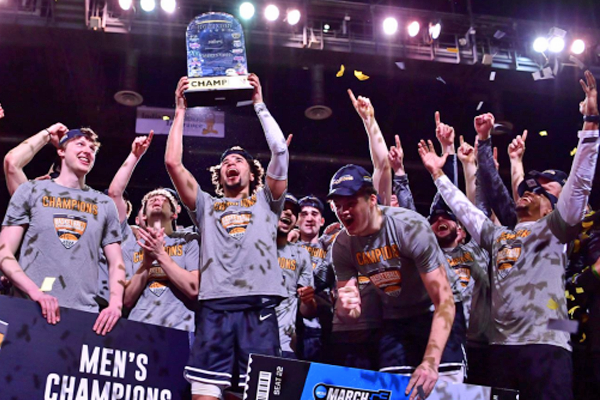 Excerpt from the WHIO

The Wright State Raiders trailed by as much 16 points early in the second half against the Northern Kentucky Norse but came back to win the 2022 Horizon League Championship, 72-71, at Indiana Farmers Coliseum in Indianapolis, Ind.

Trey Calvin hit the game winning jumper with 10 seconds to go to put the Raiders ahead for good and Bryson Langdon missed a three-pointer as time expired. Wright State improved to 21-13, winning the Horizon League championship for the first time since 2018 and will be in the NCAA Tournament.

Calvin led WSU with 21 points while Tanner Holden added 19 points. Grant Basile had 18 points, seven rebounds and was named the tournament Most Outstanding Player. Tim Finke scored 10 points. The Raiders shot 46 percent (26-57) for the game, including 61 percent in the second half.

The Raiders led, 70-68, with 20 seconds left when Marques Warrick buried a three point to reclaim the lead for the Norse, 71-70. But Wright State did not call a timeout and Calvin’s jumper put the Raiders ahead, 72-71 with 10 seconds to play. Langdon missed a three-point attempt for NKU, the Raiders grabbed the missed and the celebration began when the buzzer sounded.

Wright State will find out who they play in the NCAA Tournament on Selection Sunday, you can watch it at 6 pm on WHIO TV.