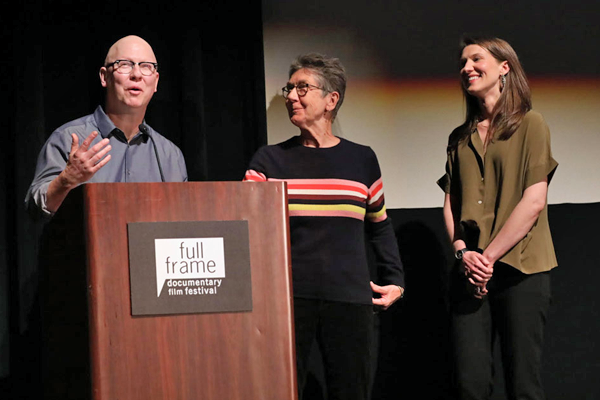 Following is an excerpt from an interview in which Full Frame artistic director Sadie Tillery talks to Steve Bognar and Julia Reichert about how they started out, their collaboration, and how their roots in the Midwest shape their work.

Sadie Tillery: You worked with a larger team to make American Factory—a film that follows many different people, travels between countries, and navigates different cultures. Can you talk about the collaboration involved in that film?

Steve Bognar: On American Factory, we had a great, amazing team—incredibly dedicated, smart, hardworking people. A lot of them were former students of ours from Wright State University who were camera people, like Aubrey Keith and Erick Stoll, or who were in the editing room, or in post-production, like Liz Yong Lowe and David Holm. We were so lucky to work with the ever-wise Diane Weyermann and Elise Pearlstein at Participant Media. And there were two people with whom we had a super-intense, super-intimate collaboration, and that was our brilliant editor, Lindsay Utz, and our producer, cinematographer, and nephew, Jeff Reichert. Normally, in the past, I’ve been the hands-on editor. We always have great consulting editors, but in the trenches, Julia and I’ve made the films mostly ourselves. On this film, Lindsay, Jeff, Julia, and I were the nucleus of collaboration. It was exhilarating. Lindsay and Jeff bring different perspectives and ingenious ideas, and I think the film is so much better for it.

“Julia Reichert: 50 Years in Film,” the touring retrospective of films by the retired WSU professor of theatre, runs through Thursday, Oct. 24, at the Wexner Center for the Arts, in Columbus.

Lindsay would challenge us. There would be a certain character that we’d want to include, or a certain scene, and she would challenge us to articulate why. And often she would persuade us to ask ourselves, “Does it fuel the larger story? Or do we like it because we love that person?” Having the kind of editor who will stand up to you—that was great. The other reason why American Factory succeeded is because of the two Chinese co-producers on the film, Yiqian Zhang and Mijie Li. Either Yiqian or Mijie were in Ohio every few weeks for over a year. We were also in China with them. They were crucial to us being able to connect with and share stories of the Chinese side of American Factory, both from the Chairman’s perspective and the workers’ perspectives. They built the relationships with the Chinese people in the film.

Julia Reichert: Most of the Chinese workers spoke no English. They boarded the plane in South China and got off the plane in Dayton, Ohio. It was a completely new world for them, but they brought their culture with them. There was no way we would’ve gotten in there. But as soon as there were Chinese people speaking to them in their language, some of them from a nearby province, the walls immediately started falling down. For me, the collaboration with Yiqian and Mijie went beyond them being in the factory and speaking the language; they helped us to understand the culture. They taught us so much.

ST: As you describe these relationships, it occurs to me that your other collaborators are the people in the film themselves.

SB: Absolutely. Though it’s not a full collaboration. I’ve thought about this a lot. When I was a younger filmmaker, I felt so grateful to anyone who would talk to me and was willing to be on camera. I felt like they were doing me a huge favor. But as time has gone on, I’ve come to feel that if someone agrees to be in a film, there’s a part of that person that wants to share their story, to put something out there, on the record. True collaboration would mean that they’re sitting in the edit room with us the whole time and making every edit decision with us. It’s not that. But there’s a collaborative aspect to being in a documentary, to shaping a portrait of a person and sharing a story. That’s always ethically complicated but a wonderful part of the process. We’re always working to be mindful of how we’re representing people. As older, white, straight, cis, middle-class Midwesterners, we have to be aware of the inherent biases that come with our particular demographics. The process of hanging out with someone and trying to figure out who they are, and working with them to do that, is very rich.

ST: You’re based in Yellow Springs, Ohio, rather than New York or Los Angeles. How has being a filmmaker in the Midwest informed your work?

JR: We don’t have that big filmmaking community, but on the other hand, we have our neighbors and a window on all these stories that are generally overlooked and have been for decades, in newspapers, on TV, in documentaries even. We get to tell the stories of people whose stories don’t get told, and we don’t have to leave home.

SB: We hear the stories before the world hears about them. Everyone was so shocked about the outcome of the 2016 election and what happened in the Midwest, but we saw it coming. Driving around and talking to people, we could see where the energy was heading months before the election.

JR: Since November 2016 there’s been a lot more stories coming out of the Midwest—people have been like, What the hell’s going on out there? I think that’s one reason why Participant Media wanted to get behind American Factory; it came out of the Midwest and was by Midwesterners. They realized that people weren’t hearing from us, that we were very ignored. And we were. Working-class people, especially, have felt disrespected and without a voice. Some thought they had found that in the person who’s now our president. Where we are located has made it possible for us to make films like A Lion in the House, The Last Truck, and certainly American Factory. You couldn’t make that kind of film flying into and out of Dayton or Cincinnati. Also life is affordable here. Groceries, rent, travel. We keep our nut low. If you want to be an independent filmmaker and control your own future, you can’t live an expensive lifestyle. You’re better off living in a place where there are interesting stories.