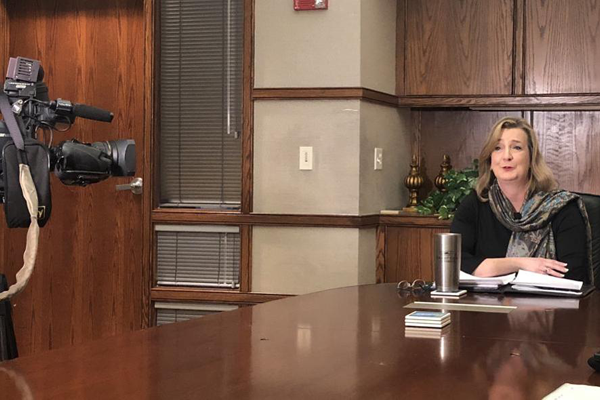 Wright State’s next president will be faced with a university financially getting back on its feet after years of deep cuts, but an eroding enrollment that reached a 37-year low this year.

Cheryl Schrader, the seventh president at Wright State in its 52-year history, announced Tuesday that she plans to step down Dec. 31, two and half years into her five-year contract.

The university and members of Wright State’s board of trustees have declined to comment publicly on how they will replace Schrader. Following a closed door meeting on Wednesday, the board left without making public comment. The board’s finance committee will meet on Oct. 25.

Leaders in the Wright State Chapter of the American Association of University Professors have been told that provost Sue Edwards will likely take over Schrader’s job on an interim basis, said union president Noeleen McIlvenna. Edwards attended part of the Tuesday’s trustees meeting while Schrader was absent.

The university’s enrollment is lower than it’s been in more than 37 years, according to WSU data. Around 13,742 students are enrolled at Wright State University, around a 11.7 percent decline from last year.

Despite faltering enrollment figures, McIlvenna said Schrader’s departure may be due in part to a rocky tenure at the university.

Specifically, McIlvenna said, it may have something to do with the 20-day faculty union strike earlier this year. The standoff — which ended Feb. 10 with a set of agreements spanning five years — is thought to be one of the longest faculty union strikes in Ohio’s history.

“I assume that of course it contributed… she lost,” McIlvenna said. “No one can know why those decisions were made by the higher echelons… At this point it’s about what’s next.”