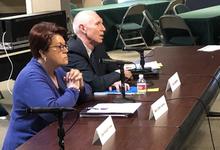 Wright State University leaders are looking for ways to hone their enrollment strategies with another decline anticipated for fall.

WSU will not start to get solid enrollment numbers for next fall until this summer as the school admits students through August, said Mary Ellen Ashley, vice president for enrollment.

But, when the numbers are available they aren’t expected to be good, school administrators said earlier this year. Around a 2 percent decline in enrollment is expected and it will amount to around a $3.5-million loss in revenue.

An expected decline came as unwelcome news to WSU leaders as tuition is the single biggest source of revenue for most colleges. Wright State is also trying to recover from a financial crisis that forced trustees to slash more than $30.8 million from the school’s budget last year.

In an attempt to reverse the enrollment declines and head off this fall’s, Wright State leaders and trustees said they wanted to bolster already-existing relationships with Sinclair Community College and Clark State Community College. Trustees told Ashley that they’d like to have a full-time Wright State employee stationed in an office at Sinclair.

“Can we carve out a full time individual that can go down there and be the face of Wright State on a full time basis?” trustee Bruce Langos said. “It’s so important to us…that we try to bolster that activity as much as we can.”

WSU already has a transfer agreement with Sinclair and the two colleges are each other’s biggest transfer partners, officials have said.

“Sinclair and Wright State have a great relationship…Thousands of students a year are served by transferring between he two institutions and we are happy to explore any ideas that allow us to work closer together and to better serve our students,” said Sinclair spokesman Adam Murka.

Ashley told trustees that her division is also focused on hosting more events to bring in students and keep ones around who are already enrolled. Last year WSU hosted a “signing day” event where they invited admitted students to campus and this year the university is looking at taking that event on the road to areas of Northern Cincinnati and Columbus, Ashley said.