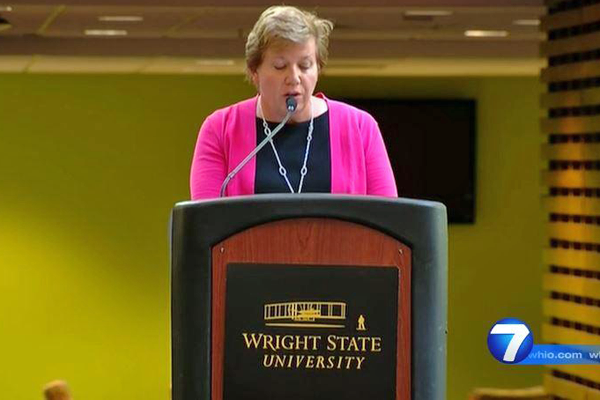 The early Sunday mass shooting in Dayton was a sobering reminder that these events are not just things that other people have to deal with, said Wright State Student Government Association president Ivan Mallett.

“This weekend we were forced to recognize that it could happen to any one of us anywhere,” Mallett said.

Mallett was among several speakers at a vigil held Monday afternoon to mourn the loss of a student killed, Megan Betts.

Laura Luehrmann, president of the Wright State faculty senate, took a moment to recognize those who were affected but were not at the vigil.

“We also now there are many more in our community who gather with us in spirit who are either unable to be with us because they are out of town or for whom such a public gathering in a time of such tremendous tragedy is too painful. We think of them in this moment as well,” Luehrmann said.

“Gatherings like today are not at all on our minds when we chose to live out our call as educators,” Luehrmann said.

Luehrmann said as educators and as engaged citizens “we are also called to make sense of this.” She said they should work to do everything they can to make sure vigils like the one that afternoon are “as rare as they should be.”

“In the midst of our tremendous grief, let’s please personally commit to move forward this week with difficult conversations and action grounded in respect, guided by research and focus,” Luehrmann said.