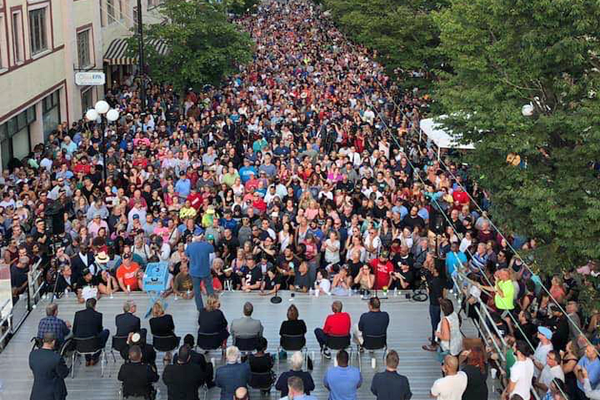 We were in Alaska when we heard the horrific news of the shooting in the Oregon District of Dayton. Being so far away made the news even more difficult to comprehend—distance in time and place intensified the feeling of helplessness.

We had run into a group of other Daytonians aboard the ship, and when we saw each other Sunday morning after the attack, we realized we now shared another common bond—disbelief and sadness.

As we were trying to wrap our heads around this awful news, I started receiving emails with reactions from our DLPP authors, many of whom identify themselves as part of the DLPP family. Marlon James, David Wood, and Gilbert King sent immediate messages checking-in to make sure their Dayton friends were OK. Other reactions came in from throughout the country and internationally, Canada, England and France.

I responded and sent the photo of the people gathered at the rally in the Oregon District Sunday evening. I wanted to reassure our friends that “Dayton is Strong” in its commitment to peace.

Below, I share with you some of the heartfelt messages received. As Andrew Krivak remarks below, “Words can bring peace and shape peace, reminding us that it's possible, reminding us that we've seen and heard and lived by examples of it often in our lives. The authors' words helped me; I hope they help you.