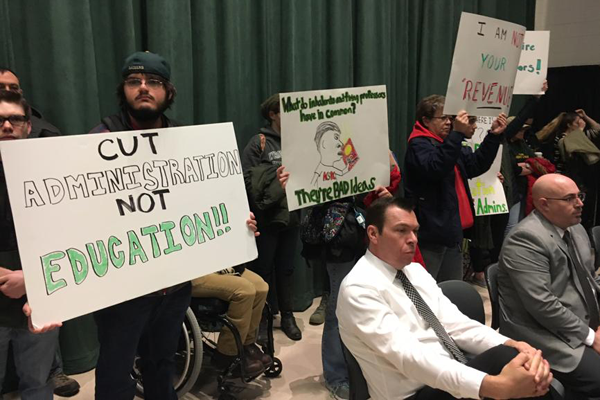 Guide to Acronyms used by AAUP-WSU

Greetings to friends of AAUP-WSU,

This note will bring you up to date on key events at Wright State University – events of special significance to current faculty, former faculty, and all who support them. Briefly put, the faculty at Wright State are under attack, and with them so are the students and the community we serve.

We have set a tentative strike date: October 1, 2018. Please read on for a summary of how we have arrived at this juncture. Please expect us to ask you to help by signing petitions, joining legal informational picketing before a strike, and joining legal picketing during a strike.

In January 2017, AAUP-WSU began negotiations for a new collective bargaining agreement (CBA) with the administration, intending to finalize a new CBA by June 30, 2017, the expiration date of the current CBA. The parties quickly adopted and formally signed ground rules that included a specific timetable for the negotiations. The parties adhered to the timetable, and fruitful negotiations were taking place.

They were taking place until the end of March 2017, when the Board of Trustees replaced WSU President David Hopkins by an interim president, Dr. Curtis McCray, to serve until Dr. Hopkins’ permanent replacement, Dr. Cheryl Schrader, would eventually take office (July 1, 2017). At about the same time, the administration took two actions unprecedented in the history of CBA negotiations at WSU: it hired an outside labor attorney to conduct the negotiations, and it brought negotiations to a halt, timetable notwithstanding.

We learned quickly that the administration wanted to re-start negotiations from scratch, ignoring the agreements already reached and the ground rules, too; that is, the administration wanted carte blanche to engage in regressive bargaining. After months of no progress, AAUP-WSU forced the administration to resume negotiations by filing for fact-finding (FF); that is the dispute resolution process specified in Ohio Revised Code when CBA negotiations are stalled. With FF looming, tentative agreement was reached on about two-thirds of the CBA articles in a series of marathon negotiating sessions in December 2017 and January 2018. Every change in those articles represents a concession made by AAUP-WSU relative to the current CBA.

FF hearings took place over six days in 2018 scattered from January 31 to May 23. The FF report – a recommendation to the parties about how to settle all unresolved CBA issues – is due on September 11, 2018. But in the hearings, the administration was finally forced to submit in writing its proposals for the entire CBA. Those proposals are horrific.

Through the nineteen months since CBA negotiations began, AAUP has been reading the tea leaves and acting accordingly.

At a packed chapter meeting in November 2017 our members unanimously amended our chapter constitution and bylaws, creating a procedure for authorizing and calling a strike. Late in January 2018, we initiated a strike authorization vote (the first of several required steps toward a strike) among the members; in barely a week, nearly 90% of our members had voted, and of those nearly 90% had voted to authorize a strike. Speaking of members – among all BUFMs, over 85% are chapter members, the highest among all collective bargaining chapters statewide. Over the months, they have turned out in numbers at Board of Trustees meetings and similar forums to signal their displeasure-and-worse at what the administration and Board are trying to do to the faculty. Even now, they are working through AAUP-WSU to try to obtain a fair CBA, but simultaneously preparing to take the additional steps required for a strike.

Unless the parties agree on a new CBA at the eleventh hour, a strike will take place, provided the members vote to reject the fact-finder’s report and the AAUP-WSU Executive Committee votes to initiate a strike.

But why hasn’t the AAUP-WSU president met with the university president to break the logjam? In fact, our chapter president Marty Kich and other officials have repeatedly sought meetings with Dr. Schrader, going back to several weeks before she assumed her office. In every case, our “let’s meet and talk” suggestions were rebuffed. That policy – the WSU president’s door is closed to AAUP-WSU – is without precedent. In every case until July 24, when Marty finally received a reply to a letter he wrote Dr. Schrader back on May 29. Marty and Dr. Schrader and a few others from each side met – finally – on August 16. What good if any will that have done? Time will tell.

But isn’t WSU in a financial crisis? Yes – but, this crisis was occasioned by several successive years of administrative incompetence, Board negligence, and inaction in the office of Ohio’s Auditor of State; it was not caused by overspending on academics or faculty; and for years, AAUP-WSU officials warned the administration at the highest level that it was steering WSU toward a big financial problem; and subsequently, AAUP-WSU has made concrete suggestions about how the administration could address the crisis without impairing the academic mission of the university – see for example the chapter’s April 2016 letter to the president and Board of Trustees whose recommendations, had they been followed, would have resulted in many millions of dollars every year of cost reductions as well as millions more in one-time cash infusions; and essentially none of our suggestions have been implemented. There are still millions in untouched opportunities to cut non-academics and save academics.

Meantime, with this message we ask you, friends of AAUP-WSU, to stand with our current bargaining unit faculty – and with the students that we serve. Yes, students! Where are they in this mess? The truth is that they have been hurt already and will be hurt more.

For example, today WSU has over ninety fewer BUFMs than early in 2016 – that’s lots of expertise gone, tons of advanced classes not offered, and more than a few elementary classes scheduled less frequently than before. Some of those departures have been de facto firings – NTE faculty on one-year appointments not renewed – but many have been faculty just leaving. To illustrate, one college alone has suffered four resignations for jobs elsewhere since May 2018; two of the four had tenure, three of the four left for other academic positions, and three of the four went out-of-state. In other colleges, WSU has lost more than a few senior full professors who quit as of July 31, 2018. Faculty leave, WSU is diminished, and students suffer.

Summer school has been badly mismanaged: many fewer sections have been offered than in previous years. Already, that has resulted in an effective 1.75% pay cut to academic year appointees (though more tuition revenue has been lost than faculty pay saved), and more importantly, more than ever students face scheduling obstacles impeding their retention and their progress toward graduation.

Thank you in advance for your help!