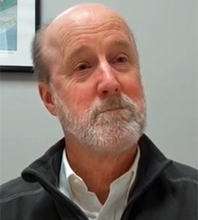 Bill E., age 73 of Bellbrook, passed peacefully on June 3, 2020. and is now with the Lord. Bill was born February 17, 1947 in San Mateo, CA to the late Englebert and Phyllis (Sasse) Rickert. After graduating from Homewood Flossmoor high school in Chicago, Bill went on to earn his Undergraduate degree at Illinois Wesleyan University and Graduate degree at Central Michigan University.

Bill was drafted to serve in the U.S. Army before returning to further his education at the University of Michigan...” Go Blue!” After earning his Ph.D., Bill moved to the Dayton area and started his long and successful career at Wright State University spanning 45 years. He was a tenured professor in the College of Liberal Arts, and served as Acting Dean, Associate Dean, and finally an Associate Provost. Many may remember his role as “Lord of the Manor” at the WSU annual Madrigal Dinner for over 30 years. Surprisingly, this wasn’t his first acting experience. He once played “Hobo Bill” on, The 16 Express, a children’s show on a local television station. Throughout his life Bill developed a strong relationship with Jesus. He served Him as an Elder at Fearless Church and desired to live in Christ’s image every day.

Bill was like a rock for not only his family, but for friends and co-workers as well; his objectiveness, patience, honesty, humility, and kind heart, described him best. He was well known for his competitive spirit in chess, pool, and ping pong. Bill was also very thoughtful and meticulous, as evidenced by his woodworking and building skills. He will be hugely missed by all who knew and loved him.

Bill was preceded in death by his parents; son-in-law Andre Pachnik; and grandmother, Grace May Sasse. He is survived by his loving wife, Susan; children Nora Pachnik, Christa (Chris) Freyhof, Beth (Vic) McHenry, and Elizabeth (Brendon) Breitenstein; 11 grandchildren; brother Tom (Jan) Rickert, and their family. The family would like to extend a special thank you to the James Cancer Center for the excellent treatment and care they provided Bill, Fearless Church for their love and support, and all of the friends, family, and neighbors for their kindness and compassion.