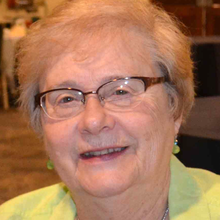 I recently saw a quote: “Books will take us many places when we can’t go anywhere,” and this has certainly been true this past year. Reading has always been an important part of my life. Because of the awe I felt for books and libraries, I wasn’t interested in getting an electronic reader, and then my daughter gave me one for Christmas. I usually resist any new technology until I have it and then very quickly learn to love it and wonder how I ever lived without it. This was true of my relationship with the Kindle.

My favorite book of the past year was The Dutch House by Ann Patchett. It is the story of two siblings, the mansion that was their family home, and their banishment from it by their step-mother. Their biological mother had left them when they were quite young. It is almost a compilation of several fairy tales but is told with wit and compassion. It is a joy to read. Patchett is the author of another of my favorite books, Bell Canto.

Another novel I enjoyed this year is Friends and Strangers by J. Courtney Sullivan. This is a contemporary novel that deals with female friendships, the politics of motherhood that play out on various web sites, the gig economy, and income equality. Yet it is told with humor and a light touch. Maine is another work by J. Courtney Sullivan that I enjoyed. It is a family saga revolving around their summer home in Maine. This novel is also written with a light touch and obvious affection for the unique family members.

As much as I enjoy novels, the books that I love most are nonfiction accounts of historical events or biographies. For me the best of these is No Ordinary Time, Franklin and Eleanor Roosevelt: The Home Front in World War II by Doris Kearns Goodwin. It is amazing to realize what FDR accomplished and the planning that was done to win a two- front war and create a new world order to follow the war. Eleanor was his eyes and conscience during this time. Since FDR had limited mobility, Eleanor would travel the country and the world to report back to the president on what she had witnessed. They had an awkward marriage and looked to others at times for love and understanding. Still, they had a strong relationship and together changed the world. I shudder to think how the modern press might have covered their White House.

Another favorite is Lawrence in Arabia: Deceit, Imperial Folly and the Making of the Modern Middle East by Scott Anderson. It is set during World War I. Britain and France are at war with the Ottoman Empire, but as Anderson points out, they are so involved in their plans to divide the Middle East between them that they almost forget to win the war. It is also the story of T. E. Lawrence who is tasked with assisting the Arabs who have been promised their independence if they fight with the British against the Turks. Lawrence was so devastated that Britain failed to keep its promise of independence to the Arabs that he turned down a knighthood

My favorite nonfiction book of the past year is The Splendid and the Vile by Eric Larsen. It is about the first year Winston Churchill was prime minister, which was also the first year of the German Blitz or the Battle of Britain during World War II. I resisted reading this book since I had read so much about Churchill and World War II but my sister promised that this book was different. The author had access to the diaries of Churchill's daughter, Mary, and his private secretary, which allowed Larsen to present a more personable portrait of the man. It also gives the reader the sense of being there not only as the bombs fell but also while Churchill presided over a dinner party.

It is certainly more fun to read about history than to live through it. I am amazed to look back at this past year and all that has happened: a worldwide pandemic, a presidential election, an attack on Congress by our own citizens, and two impeachment trials. This has truly been a seminal year and many books will be written about it. I look forward to reading at least the early ones.