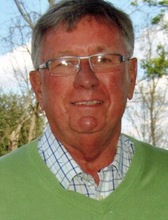 Mr. Luby was a graduate of Follansbee High School in Follansbee, West Virginia, class of 1961. He earned his bachelor’s in education from Marshall University in 1965, and his master’s in education from Wright State University in 1970. Robert spent his next 33 years in Piqua City Schools as a teacher, administrator and coach; 30 years teaching at Bennett Junior High School and was the Principal at Bennett for 13 years. Following his retirement, he was employed by Wright State University as a supervisor of student teachers, and an instructor for nine years.

Robert broadcast Piqua High School football games on WPTW Radio with Duane Bachman for many years. He was also an active member of Alexander Stadium - Purk Field Building Committee and Artificial Turf Committee. Robert served on the Piqua Board of Education including time serving as the president, and was also a part of the Southwest Ohio School Board and served on the Upper Valley JVS School Board. He was an active member of the Miami County YMCA where he served as a member of its Board of Directors, and a longtime, devout member of Greene Street United Methodist, serving as a Lay Leader and many other church committees. Robert was a huge football fan, especially Piqua High School and West Virginia University.

A service to honor his life was held Feb. 23 at Greene Street United Methodist Church with Rev. Will Leasure officiating.  Memorial contributions may be made in his name to the Piqua Education Foundation, P. O. Box 201, Piqua, OH 45356.