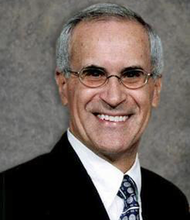 Michael “Mick” Ferrari passed away Friday, May 15, 2015, at his beloved home in Scottsdale, Ariz., at the age of 75 from pancreatic cancer.

Dr. Ferrari served as chancellor and professor of management at Texas Christian University from 1998-2003 and upon retirement in 2003, was named Chancellor Emeritus by the Board of Trustees. Following his retirement, he remained highly involved in higher education by serving as an academic search consultant. Prior to his tenure as chancellor at TCU, he served as president and professor of management at Drake University (Iowa) from 1985-98. He also served as mentor to eleven members of his senior administrative teams who subsequently were selected as college or university presidents.

He is the author of Profiles of American College Presidents with numerous other publications in strategic planning, academic-industry relationships and integrated marketing in higher education.

In 2003, the Board of Trustees of TCU established the Michael R. Ferrari Distinguished Leadership and Service Award, which is presented annually to recognize his contributions to the university and the community. In 1983, the BGSU Trustees also established the Michael R. Ferrari Award in his honor to recognize on an annual basis his exemplary administrative accomplishments and service. Dr. Ferrari is the recipient of the Distinguished Alumni Award from Michigan State University, the highest recognition bestowed on its graduates, and was awarded an honorary Doctor of Public Service from Bowling Green State University.

Mick was born on May 12, 1940, in Monongahela, Penn. He loved to play his trumpet, taught tennis and adored his aquarium fish. His many grandchildren brought him much pride and joy.

He is survived by his wife Jan and their two children, Beth (Jim) and Michael (Jenny) and 7 grandchildren, Vera, Bella, Maeve, Seamus, Michael, Charlie and Henry. He is also survived by his brother, Dick (Sandy).

In lieu of flowers, Mick would have been grateful for donations to be made to the Pancreatic Cancer Action Network. The funeral service was held May 27 at The Church of the Holy Spirit, 400 East Westminster Road, Lake Forest, with interment at Lake Forest Cemetery.