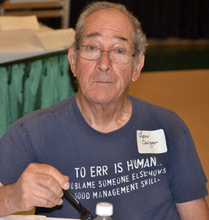 Leonard, a first generation American, was born to immigrant parents, Jacob Cohen and Esther Yetta Cohen Leon, the fourth of four boys. Shortly after Len’s birth, his father contracted tuberculosis and spent the remainder of his life in a sanitarium near Denver, Colo.

In 1941, the family moved to Detroit, Mich., where the oldest son, David, was employed in a defense factory. Esther worked preparing food for Jewish celebrations and made a “liquor” to sell to neighbors and the neighborhood cop, who would drop in for his free shot. When the two oldest boys were drafted in WWII, Esther took over David’s job at the defense factory.

After graduating from Cass Technical High School, Len worked as a jumper for the Detroit News. He was drafted in 1951 (Korea) despite missing back vertebrae and was assigned as a mental health tech at Fitzsimmons Army Hospital near Denver. He had a partially successful back surgery and was discharged a year later.

The GI Bill motivated Len to take classes at Wayne State University in Detroit. He graduated with a B.A. in journalism. A determined professor, Ed Jandy, convinced Len to continue in sociology. Len completed his Ph.D. in sociology in 1968. Len taught at Macomb County Community College for three years. Tired of Detroit, Len accepted a position at Transylvania University in Lexington, Ky. He enjoyed the small classes, but not the social life of horses and alcohol. A visiting book salesman told Len about a new college in Fairborn, Ohio. Len taught at Wright State University from 1970 until his early retirement in 1988 at the age of 58.

During his tenure at Wright State, Len was recognized for his research on singles. With colleague Matthew Melko, Len co-authored “Singles: Myths and Realities,” published in 1982. The two authors had been featured in the March 23, 1981, issue of People’s Weekly magazine for their research. Len also traveled extensively, with New Zealand being his favorite country. In 1980, Len was a visiting professor at the University of Canterbury, New Zealand, and at the Australian National University.

Len continued researching singles as a visiting professor to Okayama University of Science in Japan in 1985 and in 1987 at the University of Sydney in Australia and the University of Waitago in New Zealand. Len’s last book on singles, “Being Single on Noah’s Ark,” was published in 2007. Len and co-author Jeanne Ballantine published 11 editions of “Sociological Footprints: Readings in Introductory Sociology” from 1979 to 2009. Len’s scholarship also included 13 published articles and papers presented at 32 conferences.

Len’s claim to fame was the establishment of Group Interaction, a program for singles, at the Miami Valley Unitarian Church in Oakwood in 1973. He also started groups in Cincinnati, Columbus, Grand Rapids, Mich., and Dunedin, New Zealand. Dayton’s Group Interaction is still meeting. Many couples met there and later married, including Len and Mary Jacobsen Betts, who celebrated 38 years of marriage last July.

In retirement, Len continued his involvement in Yellow Springs and the greater community. He set up a scholarship fund at Wayne State University for “late bloomers” like himself. In Yellow Springs, he served as a precinct captain, was the first male president of the YS Library Association and organized and ran Glen Helen’s Pancake Breakfast for 10 years. Len was an active member of the YS Tree Committee and distributed many red raspberry canes from his prolific garden. In later years, Len donated extensively to Antioch’s Al Denman fund, the YS Community Foundation, to Glen Helen for improvements in the Lodge kitchen as well as the building of a handicap accessible ramp and to the Friends Care Rehabilitation Center, named after Len and David Cargan.

Len was a caring man, committed to his community, and a wonderful storyteller with a grin and a twinkle in his eye. He is survived by his wife, Mary, and stepchildren, Alice Carol Jensen (Andrew) and Stephen Ried Betts (Moira). There will be no memorial service. Donations in Len’s memory can be made to Hospice of Dayton, Glen Helen Association or a charity of your choice.