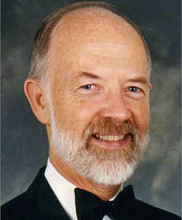 John began his career in academia as an English literature professor, finding special joy in teaching Shakespeare and the Bible as literature. He served as the chief academic officer at numerous colleges, including as dean of academic affairs at Mount Union College and most recently as provost of Wright State University.

John was a skilled birder, sharing his love of nature in woodland walks with his wife, children and grandchildren. In retirement he expressed his love of both nature and art through his painting.

John was preceded in death by his son Scott (Beth); his parents, Paul and Ruth Fleischauer; and his sisters, Winifred Collins and Barbara Nobles. He is survived by his childhood sweetheart, best friend, enduring love, travel companion and wife of 57 years, Janet; his sons Eric (Mary Sue) and Marc (Kathy) and six grandchildren.

The family will receive visitors beginning at 10 a.m. ,Saturday, January 26, 2019, with a memorial celebration at 11 a.m., at Christ United Methodist Church, 3440 Shroyer Road, Kettering. The family thanks Hospice of Dayton for its loving care in the final days of John’s life.