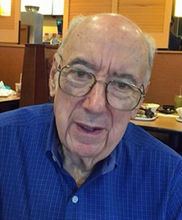 He was a 1953 graduate of Xenia Central High School, and NCR’s Modelmaker Apprenticeship Program in 1960. A veteran of the United States Air Force Reserve, Jim worked at NCR until 1976. He retired as the Instrument Shop Supervisor from the Wright State University College of Engineering and Computer Science in 1999.

A devoted grandfather, Jim would seize every opportunity to attend all his grandchildren’s events and support them in all their endeavors. He was preceded in death by his parents, his brother Richard A. Arehart, and his wife, Sandra L. (Nies) Arehart, whom he married, July 27, 1963. He is survived by a son Brian J. (Sandee) Arehart of Beavercreek; and daughter Allison Lee (Edward C.) Heigel of Beavercreek; grandchildren Jordan (Marcus) Celestin of Alexandria, KY, Jillian Heigel of Kettering, Alayna Arehart and Alex Arehart of Beavercreek; great granddaughter: Austyn Celestin of Alexandria, KY; sister-in-law: Rhea Arehart of Xenia.

Family will receive friends 1-4 p.m., Sunday, July 18, 2021 at the Tobias Funeral Home-Beavercreek Chapel (Masonic Services at 4 p.m.). Funeral Service will be held 11 a.m., Monday, July 19, 2021, at Peace Lutheran Church, 3530 Dayton-Xenia Rd, Beavercreek, Ohio. In Lieu of flowers, contributions may be made to the Dayton Masonic Foundation.

Memory from fellow retiree Rubin Battino, who provided the photo:

I met Jim when he started working in the model shop at Wright State. (I was the faculty supervisor of the shop.) After Howard DuFour retired Jim became head of the shop. For many years (both before and after he retired) we met weekly for lunch at Panera Bread. (I am attaching a photo below I took at one of our lunch meetings.) We shared many memories and activities and current events in our lives. One of them had to do with the Wright Brothers project where we were active in the building of the accurate full-scale 1903 plane which hangs in the atrium of the WSU library. We also traveled the country together recording interviews with Charlie Taylor's family (I later edited an oral history based on this.) Jim also helped me with little home projects, just as he helped many others generously with fixing things for them.  The bottom line for me (and many others) is that Jim was a genuinely good man. He leaves some wonderful memories and a huge gap in the lives of all of those he knew and helped and loved. Eating lunch at Panera Bread will never be the same again even though he will be with me in some way.