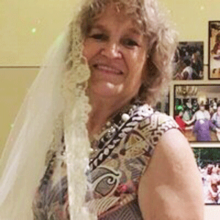 Jacqueline H. McHale, 71, of County Route 42, Carthage, N.Y., died early Thursday morning, Dec. 2, 2021, at the Carthage Center for Rehabilitation and Nursing where she was a patient for two weeks.

Jacqueline was born Nov. 8,1950, in Huntington, W.Va., the daughter of the late Cal Richard and Lois Hope (Barnes) Mooney. She studied Architecture at Miami University (Ohio) and then went on to receive both her bachelors and master’s degrees (Summa Cum Laude) in Fine Arts from Wright State University in Dayton, Ohio. Her talent and passion for art led her to become a sculpture professor at the university where she shared her calling with students for over 10 years. Jacqueline’s art was displayed in several exhibitions in and around the Dayton area. She also received an award from the city for a light sculpture that she created.

She was united in marriage to Larry Thomas McHale on June 21, 1975, sharing over 40 years together before his passing on Feb. 25, 2016. She has resided with her granddaughter, Ashley, grandson, John, and son-in-law, Aaron, in southern California, Texas, and the Carthage area for the past five years.

Jacqueline was a loving mother to her two sons and three grandchildren. All five of them were proud to call her mom. Her greatest love was her family. She was the biggest fan and an ardent supporter for all six of her siblings.

She is predeceased by her husband, Larry Thomas McHale who died on Feb. 25, 2016, and three brothers, David, Steve and Tim Mooney.

Funeral services will be at the convenience of the family. Arrangements are with the Bezanilla-McGraw Funeral Home, Carthage, N.Y.