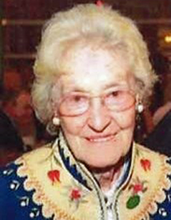 Irene Danuta Romanowska, 101, of Kettering passed away on March 22, 2020. Born on Jan. 3, 1919, in Wieliczka, Poland, her life would forever change 20 years later with the German invasion in 1939. Danuta couldn't fight the occupation but she could resist, as a messenger for the Polish Resistance fighting Nazi forces hiding information in her clothing. Danuta was captured by the Gestapo, brutally interrogated, and imprisoned. After 9 months of brutality, the Nazis released her, but those physical and mental scars remained until her death.

She did find love during the war, and married Lech Wojciechowski, also a Resistance Fighter. At war's end the Wojciechowski's had to flee Poland with yet another invasion, that of the Soviet Union. They fled to US-occupied Germany, but Danuta’s husband, Lech, died soon after. She met her second husband, Dr. Leonidas Romanowski, in Germany, and they came to the United States to begin a new life.

Danuta was an active member of St. Adalbert Church and the Dayton Polish community, and she was an outspoken promoter of Polish culture and tradition throughout the Miami Valley. She spent 35 years as the Wright State University Music Librarian. In 2001, the university established the Irene Romanowski Piano Scholarship, helping hundreds of students.

After retirement, Danuta volunteered at the University of Dayton's Marian Library, where she translated Polish Marian poetry into English.

Danuta was preceded in death by her parents, Stephan and Katarzyna (Zazula) Rosiek; her beloved husbands, Lech and Leonidas; her brother and sisters; and nephew, Roman Rosiek. She is survived by many friends.

COVID-19 In accordance with the Emergency Stay at Home and Social Distancing Order issued by the state of Ohio, there will be no visitation. You may express your condolences and light a candle for Irene and her family by logging onto the Newcomer Funeral Home website. There will be a Memorial Mass celebrated at St. Adalbert Church at a later date.