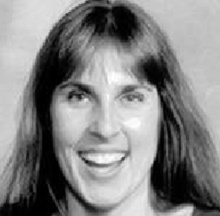 Eve Monica  “Evie” Wolf, 66, beloved mother and psychologist, died on Nov. 20, 2021, in her room at Brookdale Oakwood, where she was affectionately cared for in the final years of her life.

She was preceded in death by her parents, Arien Wolf and Dr. Elizabeth Baker Wolf Corman; her sister Winifred "Wendy" Wolf; and her husband Randal Knight. She will be dearly missed and is survived by her two beloved children, Arien and Sarah Wolf-Knight, and siblings, Dr. Douglas Wolf and Christina Wolf Dobbs.

Eve was born Nov. 5, 1955, in Cleveland, to parents, Dr. Elizabeth Baker Wolf Corman and Arien Wolf and raised in Huntington, W.Va. She was a person of immense resilience, having lost both her father and sister in a car accident as a pre-teen. She graduated as valedictorian from Huntington High School and went on to graduate from Duke University, after which she obtained her Ph.D. in psychology from Kent State University. She was a beloved professor on the faculty of Wright State University's School of Professional Psychology where she eventually rose to the role of associate dean for Academic Affairs, before her retirement in 2013.

Eve lived her life with a profound sense of contentment. She liked to start each day with a run. She took comfort in her faith and was an active member of the Dayton Jewish community. Never an unkind word to say about anyone, she cared deeply for those around her, especially her devoted husband of 33 years, Randy, her two children, and her ever loyal cats, Mae, Tom, Maya, Oscar and Wiener.

After a decade-long decline as the result of fronto-temporal dementia, Eve succumbed to the unsympathetic disease, which she faced each moment with impossible grace and candor, without ever ceasing to instill light in each person she encountered along the way.

Memorial donations can be made to the Association for Fronto-Temporal Dementia online at https://www.theaftd.org/support-aftds-mission/ or mailed to AFTD, 2700 Horizon Drive, Suite 120, King of Prussia, PA, 19406.