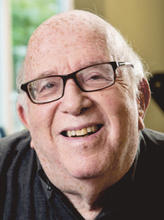 Dr. Friedland came to Dayton in 1968 when he accepted an appointment as the Harriet Sanders Scholar of Judaic Studies, a position which was created with the assistance of the late Rabbi Selwyn Ruslander of Temple Israel and a generous donation from the Harriet Sanders Trust. This joint position required Dr. Friedland to teach two courses a year at four different institutions, Antioch College (until 1982), United Theological Seminary, University of Dayton, and Wright State University. He took on this challenging post one year after receiving his doctoral degree in Judaic Studies from Brandeis University, from which he also received his master’s degree.

As Sanders Scholar, Dr. Friedland taught a variety of courses that displayed his wide-ranging accomplishment in the field of Judaic Studies. Deeply versed in scripture, he offered classes on every aspect of the Hebrew Bible, including prophets, wisdom literature, and biblical poetry. He also taught courses on the faith and practice of Judaism, Jewish philosophy and theology, rabbinic literature and Hebrew language, and covered such modern topics as the Holocaust, the Meaning of God after Auschwitz, Modern Israeli Literature, and Women in Judaism.

Throughout his career, Dr. Friedland was a prolific scholar, publishing widely in many prominent Jewish Studies journals. His area of academic specialty was liturgy. This interest culminated in his scholarly monograph, published in 1997 by Hebrew Union College Press, entitled “Were Our Mouths Filled With Song”: Studies in Liberal Jewish Liturgy. His secondary areas of interest included disability studies and interfaith relations.

As Sanders Scholar, Dr. Friedland worked diligently to promote outreach among peoples of different faiths. Teaching at four such different institutions—a Catholic university, a Protestant Christian seminary, a state university, and a private liberal arts college—required him to reach dramatically different audiences, a challenge he easily met with his erudition, humor, and innate ability to navigate difference in a respectful manner. Dr. Friedland also promoted interfaith dialogue in the Dayton region more broadly by extensive community service, serving on committees, speaking at events sponsored by a wide variety of places of worship, and maintaining long-term study partnerships with people of different faiths.

Dr. Friedland’s most lasting contribution to interfaith dialogue came through his leadership in establishing the Ryterband Judaics Symposium, a lecture series co-sponsored by The University of Dayton, United Theological Seminary, and Wright State University. The first Symposium was held in 1978, and since that time it has occurred annually at one of its three partner institutions. Generous donations by Dr. and Mrs. Louis Ryterband and Mrs. Natalie Roth created an endowment for the Symposium, thereby ensuring that Dr. Friedland’s original vision of an event designed to bring people together--people from three different academic institutions, academics and community members, people of different faiths--would continue into the future. Following Dr. Friedland’s retirement in 1998, the Symposium has been coordinated by Dr. Mark Verman, Zusman Chair of Judaic Studies at Wright State University.