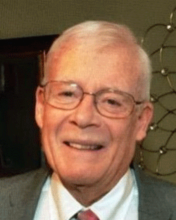 Ed was a graduate of St. John’s Preparatory School, Brooklyn, N.Y., and St. Peter’s University, Jersey City, N.J. After college, Ed became a Brother of the Poor of St. Francis at Mt. Alverno in Cincinnati, Ohio. After leaving the brotherhood, Ed became a teacher at Longview State Hospital while also working at the Children’s Home of Cincinnati. He then became an administrator of New Hope School for Special Needs Students in Brown County Ohio. Ed was an administrator for the Board of Mental Health of Brown County, a teacher at Chatfield College in St. Martin, Ohio, as well as Director of HEALTH-UC Rural Health Services in Georgetown, Ohio.

A Funeral Mass will be held at Jacob Schoen & Son Funeral Home,  in New Orleans, on Tuesday, Oct. 26, 2021, at 12:15 P.M. Interment will be in Greenwood Cemetery. In lieu of flowers, the family requests donations made in Ed’s name to Covenant House New Orleans and Magnolia Community Services.