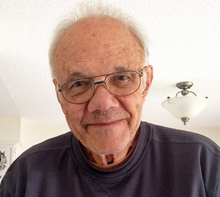 David Roy Wood, 86, passed away July 12, 2021, at Friendsview Retirement Community in Newberg, Oregon. The son of Gerald and Helen Wood, David was born March, 1935 in Newberg, Oregon. His family, lifelong Quakers, worked at Friends University in Wichita, Kansas. David was educated in the local public schools and attended Friends University and then received his advanced degrees in Physics at the University of Michigan and Purdue University. Between graduate schools David decided to fulfill his responsibilities as a conscientious objector to war. He was assigned to Scattergood School in Iowa where he taught math and science.

David enjoyed traveling and exploring new places. A tendency noted in his journals about his childhood: “My earliest recollections were from when I was three years old and I was not allowed to go up and see the Indians at Acoma.” Well, he made it to Acoma and spent numerous summers on archeological digs in the west as well as responding to the boys asking him, “Are we lost?” Fond childhood memories included looking for agates on the Oregon beaches and enjoying a family cabin on the Alsea River east of Waldport. David became an avid outdoorsman, loving activities such as hiking, mountaineering and caving, which involved leading activities for numerous outdoor groups including regional events for American Youth Hostels Inc. in Ohio. An avid photographer, David took many, many photos that allowed others to be a part of his experiences.

In 1967 he joined the faculty at Wright State University in Dayton, Ohio. His desire not to be a part of the military industrial complex led David to make choices throughout his life and led to years of service as a teacher and mentor rather than working on research projects at a nearby air force base. One highlight was the six months David spent as an exchange professor at Beijing Normal University in Beijing, China, in 1994-95, where he demonstrated many low cost hands-on learning experiences in the area of physics.

David and Virginia were married in 1967 in the chapel on the campus of Punahou School in Honolulu, Hawaii. The couple took up residency in Ohio and began their work as Quakers and educators. David clerked many committees for Dayton Monthly Meeting, Miami Quarterly Meeting, and Ohio Valley Yearly Meeting (OVYM). He served as representative for OVYM to the Friends World Committee for Consultation, Section of the Americas, and along with Virginia served on the Religious Education Committee and Traveling Ministries Committee for Friends General Conference, both national Quaker organizations. When they moved to Oregon they joined Salem Monthly Meeting, a part of North Pacific Yearly Meeting.

Knowledgeable of the wider body of Friends, David sought to build bonds between the various branches of Friends. In 1999 David and Virginia were released by Ohio Valley Yearly to be a listening presence for Quaker Meetings and isolated Friends. An address book begun in 1997 listing individuals who served as hosts during their travels records 103 entries that includes 31 states and four provinces in Canada. Their personal travels took them to Friends Centers in Japan, New Zealand, and Nicaragua and eventually as Friends in Residence for Honolulu Monthly Meeting 2010-2012. This desire to be a welcoming presence and resource for others was so much a part of David’s life.

David’s love of the outdoors drew him back to Oregon in 2012. David’s uncle Homer Hester was mayor of Newberg when the ground was first broken for Friendsview Retirement Community. A cousin served as a doctor on call for the facility and two relatives have preceded him as residents.

David is survived by his wife Virginia Wood, of Newberg; sons Mark Wood, of Dayton, Ohio, and Steven Wood, of Waltham, Mass.; and granddaughters Bianca Wood and KeDi Wu. He was preceded in death by his parents and his brother Thomas A. Wood. Interment will be in Maple Grove Cemetery in Cincinnati, Ohio. In memory donations may be made to Right Sharing of World Resources.

A Memorial Meeting will take place at 1 p.m., Saturday, August 7, 2021, at the Salem Friends Meeting House, 490 19th St NE, Salem, Ore. Wearing of masks is welcome. All are invited to stay to share fellowship and refreshments.