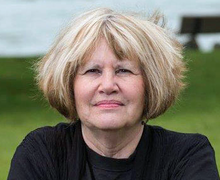 Bonnie Kay Mathies, 77, of Centerville and Celina, Ohio, died Thursday, August 8, 2019, in the Wayne Healthcare Hospice Center in Greenville with her family at her side.

She was born on May 20, 1942, in Toledo, the daughter of William 'Dick' and Ella Kriener. She is survived by her husband, Bill of Centerville and Celina. Surviving are two sons, William (Catherine) of Terre Haute, Ind., and Charlie (Leasa) of Helsinki, Finland; four grandchildren, Andrew, Adam, Logan, and Aspen; her sister, Susan (Jim) Royster of Detroit, Mich.; brother, William (Shela) Kriener of Fort Wayne, Ind., and brother Joel (Sally) Kriener of Toledo, Ohio.

Bonnie grew up in Point Place, a Toledo neighborhood that nudges Lake Erie. Her father was a power engineer at Toledo Edison. She was a 1960 graduate of the Woodward High School. While getting her bachelor's degree, she was a member of Alpha Omicron Pi. After graduation in 1964, she worked in the Oberlin and Toledo public schools where she taught English, history and biology.

Bonnie received her master’s in instructional technology in 1968, and her Ph.D. in curriculum and foundations in 1976. All of her degrees were earned at the University of Toledo. In 1974, she joined the faculty at Wright State University's main campus. She worked there for over 30 years as a professor, department chair, and associate dean and dean.

She arrived at the WSU Lake Campus in 2007, becoming dean in 2010 until she retired in 2016. During her tenure at the Lake Campus the school experienced surging enrollments, a nearly doubling of bachelor-degree programs (including engineering, nursing, & business), construction of the first residence halls and the purchase of nearly 40 acres for expansion.

She was active in state and national library and technology organizations, served 20 years on the Centerville Washington Library board, and was recently serving on both the Grand Lake Restoration Committee and the Clothes That Work program.

The family will receive friends Saturday, August 17, from 11 a.m. until time of the memorial service, at noon at Schlientz & Moore Funeral Home, 1632 Wayne Ave., Dayton 45410.

Condolences may be left at SchlientzandMoore.com.