Classes will be held remotely for the remainder of the spring semester, and all official university events and student activities are suspended until further notice. While the Dayton and Lake campuses remain open, access to campus is restricted to personnel who have been identified as essential. Read more.
CaTS | Information Technology

Some computer labs at Wright State are now considered virtual labs, which are similar to traditional labs except that the operating system and all programs are on the cloud instead of the local computer. 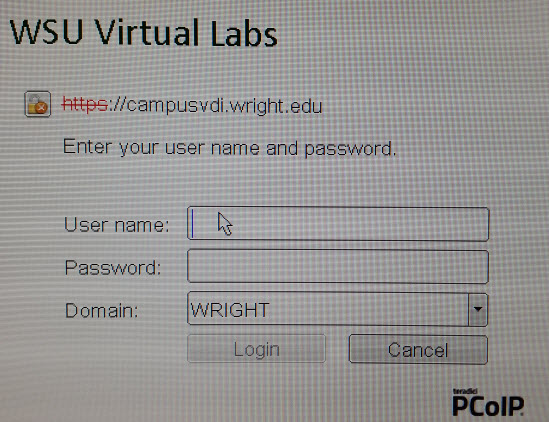 VDI stands for Virtual Desktop Infrastructure. The new virtual lab will be a cloud computing environment, which provides Wright State with the ability to better manage workstations, integrate applications and tools, increase data security, and provide a consistent desktop environment.

In the future, Wright State will operate on a fully functional cloud computing environment. Campus computer labs will feature virtual machines, and University offices will be converted to a virtual desktop infrastructure. Wright State members will have the ability to access University applications outside of computer labs as well as off campus. Some of these applications include:

The benefits of moving toward a virtual infrastructure include:

In this environment the University workstations, applications, and data is housed in our data center and is fully protected. Daily backups of data are performed and users can access their Wright State computing environment from any device, including desktop computers, tablets, terminals, and smart phones. These expanded offerings would allow the University to leverage the 'Bring Your Own Device' (BYOD) concept and position Wright State as a technological leader.

Watch both live and recorded streams of university events!